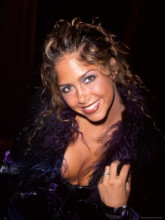 “My friend told me I had to straighten my hair for the photo shoot to appear more feline. And of course make kohl-lined cat eyes.” The 27 year old R&B/pop singer was glad to share the camera with her beautiful grey cat Smokey or “Mokes” as she calls him. And she’s not the only one whol calls him that. Her African Grey bird, with a 200-word vocabulary, also calls the cat. “He coos here Mokes Mokes Mokes. Come here Smokey,” Samantha laughs. Cole got Smokey while she was engaged and living in Maryland and says about the end of that relationship, “Smokey made me happy when nothing else did. He got me through all that.”

The cat is happier than ever having the buxom singer all to himself. She says, “It sounds strange, but he loves big breasted women. He’s really a ‘ladies-cat’!” Cole is a beautiful, powerful self-assured woman with a voice to match and is busy these days dazzling the music industry – with a new manager and a new band project she’s wrapping up in London. She is also featured on the Dark Angel soundtrack and recently made a cameo in Damon Dash’s film, Death of a Dynasty.

Before that she toured with her friend Shaggy and sand on his album that went to the top of the charts.

As she tells me this, the stylist alerts us – Smokey has opened the door (where he was waiting before the shoot – getting all gussied up). “Come look!” she tells me like the proud mother she is, “He is always opening doors.”

When Smokey was little, she admits, “I used to feed him from my hand. After a few months he started feeding himself, grabbing food and eating it from his paw. “It’s kind of scary – if he sees me doing something, he’ll try to do it too. He’s my little shadow.” The Southampton native was originally discovered in New York City at the age of 12 and has been traveling back and forth for years.” Sometimes he comes with me,” she says, “but he’ll meow the whole time until I put him on my lap. It’s hard to drive like that, but he hates being in his cage.”

“I want to clone him even though I know cloning is bad and obviously it wouldn’t be the same cat. But I get so freaked out thinking that there will be a day when he’s not around. Thank goodness he’s only two. I’ve got time.