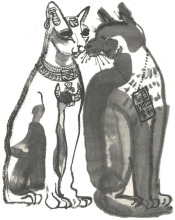 We all know cats love to eat fish. But how many cats do you know reap the benefits of dining on New York Times four-star sashimi-style fish liver and other fruits of the sea? That is, unless you know the two cats owned by acclaimed chef Eric Ripert, executive chef and co-owner of New York City’s shrine to fine seafood, Le Bernardin.

One of Le Bernardin’s fish purveyors gave Mystique, a four-year-old Maine coon cat, to Eric as a gift. The four-star chef was also given Bowie, an eight-month-old white ball of fluff with one blue eye and one green eye, as a gift. The two cats get along and enjoy typical cat play. They are New York cats, so they have a touch of sophistication…and a great diet with occasional leftovers brought home from one of the city’s top restaurants.
Eric Ripert is sleek like a cat. Handsome, groomed, and well-spoken, he epitomizes the serious and successful celebrity chef. Ripert grew up in Andorra, a tiny country wedged between France and Spain with serious shopping bargains. In Paris, he trained with the great Joel Robuchon at Jamin. In the U.S., he worked with the great, late Jean-Louis Palladin at Restaurant Jean-Louis at the Watergate in Washington, D.C.
Eric has worked at Le Bernardin for 12 years. He assumed the position of executive chef in 1994 after the sudden and premature death of Gilbert Le Coze who with his sister Maguy started Le Bernardin in 1986. At the time of Le Coze’s death, Le Bernardin had already received four-star reviews – twice – in The New York Times.
The death of a chef on top of his game is always a blow to a restaurant’s psyche. Critics stand up and lick their lips in anticipation of what’s to come. Customers become timid. Will the restaurant manage to carry on? After Le Coze’s passing, Eric managed to steer the restaurant’s kitchen through a smooth transition, and Maguy kept the faith. Le Bernardin has thrived and continues to be one of the top fine seafood restaurants in the nation (excuse me, the world!). Le Bernardin has earned numerous accolades, including the 1998 James Beard Foundation Award for S. Pellegrino Outstanding Restaurant. In 2003, Ripert was a nominee for James Beard Foundation/All-Clad Metalcrafter’s Outstanding Chef. Eric became a partner in the restaurant in 1996 after earning its third four-star review in 1995 by The New York Times.
Eric is a thinking man’s chef. Last year, he co-wrote with journalist Michael Ruhlman – A Return To Cooking (Artisan). The book was also nominated for a 2003 James Beard Foundation/KitchenAid Book Award.
“I wanted to go back to the roots of cooking at home and explore different regions and seasons in the United States. I wanted to improvise and interact with other kinds of artists such as painters, writers, and photographers, and share with them my passion, and in the process, find another kind of inspiration,” said Ripert  in his book.
Eric also co-authored Le Bernardin Cookbook-Four-Star Simplicity (Broadway Books). The book showcases the philosophy of this great restaurant: start with incredibly fresh product, cook it lightly, season it simply, and let the flavors speak for themselves. The menu at Le Bernardin has an outstanding selection of seafood covering three categories: simply raw, lightly cooked and main courses. They are all delicious – their flavors pop on your tongue. Carnivores, take note: There is a small section for you, too – but one taste of the fresh hamachi followed by a sandwich of beluga caviar even convinced my meat and potatoes father to become a fan of the fin.