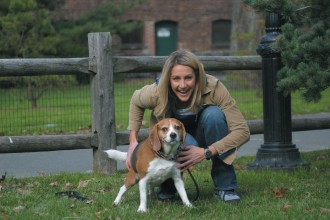 Whether you’re a famous celebrity or the girl next door, pets are the world’s great equalizers. Summer Sanders – North America’s favorite fresh-faced Olympic swimmer-turned-television personality – says she’s constantly amazed at the popularity of Smalls, her gregarious, 7-year-old Beagle. This is especially evident in her upper west side Manhattan neighborhood, where Summers shares an apartment with boyfriend David Friedman, executive producer of NBC’s Last Call with Carson Daly, whom she met on the set of  The Today Show.

“One of the great things about living in New York is that there are so many serious dog lovers,” says Sanders, 30, who appears on three television shows, including NBA Inside Stuff, which she hosts with Ahmad Rashad. “When I’m in the street walking my dog, people will say “Hey Smalls.” They don’t know who I am, but they know Smalls!”

That’s because Smalls often hits the streets with either David, or Elizabeth, the family’s favorite dog walker, while Sanders juggles her television career: Besides co-hosting and interviewing basketball players for NBA Inside Stuff, Sanders also contributes human-interest pieces to NBC’s Today Show, and hosts U.S. Olympic Gold, a program for which she interviews Olympic athletes.

“My boyfriend David probably spends as much time with Smalls, if not more, than I do, especially during NBA season because I travel so much. And Elizabeth loves Smalls too,” she says. “She helps us out, because he can’t be stuck in the apartment all day.”

She says one of her favorite things about traveling is returning home to Smalls. “I always know that no matter how late it is, that when I open that door he’ll be there to greet me with his tail wagging. Even if he’s half asleep with his eyes barely open,” says Sanders, who named Smalls after a character in the kids’ baseball film, The Sandlot. “It’s one of the nicest sights in the world. It makes me feel so good to know that Smalls is so happy to see me. I feel like I have a buddy no matter what.”

Sanders recently had to put her little buddy on a big diet. You see, Smalls is a tad, um, overweight (okay, he’s pushing 30 pounds). “He’s big-boned!” says the former gold medallist with a laugh. “I think Smalls feels pressure to clean up the streets of New York – to rid them of pizza crusts and any other food particles. He is hilarious. He will lick the streets.” Not that he has to, she explains. “Certain shop owners and doormen in the city give out dog treats. And they watch out for Smalls.” Her beloved beagle also doubles as quite an efficient vacuum cleaner. “The only thing he won’t eat is Pirates Booty, Quaker Oats squares, or any citrus fruit,” she says.

Sanders admits she can’t help spoiling Smalls, who, by the way, has a comfy dog bed in every room of the apartment because “hard floors can get uncomfortable,” she explains.  “Smalls is a lover, a napper and he snores like a little old man,” she says. “Sometimes we’ll mute the TV just to hear him snore because it’s so funny. He’s like a human being. I took him to the vet once because he was making these noises, and the vet said he had post-nasal drip!”

She adds, “It’s funny. David and I will be on the couch at night watching TV, and we’ll look at each other and say, ‘Where’s Smalls?’ And he’ll have just gone to bed. It’s like, ‘I’m tired, see you guys in the morning.’ Just like a little person.”