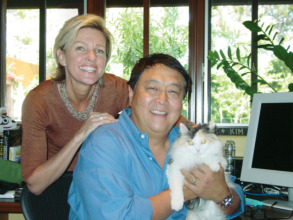 Financial whiz and author of Rich Dad, Poor Dad, Robert Kiyosaki and his wife Kim take their long-haired cat Sweetie to the office every day.  In the business of helping people find financial freedom by teaching them to “make their money work for them” in lieu of the reverse, Robert is adamant about one thing: Never do business with someone who’s pet you don’t like.  Obviously, Kiyosaki’s colleagues are all big fans of his feline who “acts like a prom queen” in the office, lazing away on the desk, the copier or on one of Robert’s latest books, showing off her stellar personality and good looks.

Robert’s adage is one that he has tested to be true.  He says his colleague Sharon had a German Shepard, a strong, intelligent breed who was the soppiest, sweetest dog in the world.  “If you met the dog,” says Robert, “it was just like Sharon and her husband.”  “On the other hand,” Robert continues, “I did this real estate deal with a guy who was in charge of a non-profit organization.  I met his pets – they were snippy and would attack and bite you.  It was just like him – he did the same in the contract.”  “I always look at a person’s animal as a reflection of who he or she is.”   Robert agrees that certain breeds get bad press – like the pit bull, but there are sweet ones and not-so-sweet ones, and it normally comes part and parcel with the personality of the owner. “Just be cautious doing business with someone who has an unfriendly animal,” Robert warns.

So, if you have a potential candidate seated in front of you, before you even glance down at his resume, ask about his pet.  Fifi, Fido, or Spot could probably tell you more about him than any piece of paper could hope to.  www.richdad.com.