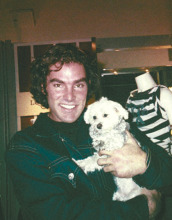 Lucky has been warming up all Spring with the hottest events and benefitsand is ready to roar into Summer! The most side-splitting fun she’s hadrecently was in Aspen, where she caught the 2003 U.S. Comedy Arts Festival,sponsored by HBO.  There she laughed along with the likes of David Spade,John Goodman, [fear factor], . . ..  Lucky filled them in on all of her bestjokes – she’s got a bunch these days, as her mom has hit the comedy circuit,dazzling audiences with ditties on dogs and dating!

All laughing aside, Lucky has been looking for truelove this year.  Moveover Zora, the miniature Maltese staked her claim for the million-dollarhunk, Joe Millionaire (Evan Marriott) at the opening of the new Levi’s storein Soho.  Dashing in denim, was our young Prince, no longer Pauper, at thepaparazzi-studded event.  And what is he going to do with his winnings?Lucky is hoping for a small token of his love in the form of severalthousand ‘greenies’ – the fastest way to a dog’s heart.

And if Joe Millionaire wasn’t enough, Lucky rebounded into the Rock the VoteParty, where she was seen in the arms of Charlie.  “Trisha doesn’t know whatshe is missing,” says Lucky, snuggling contentedly in the runner-up’s arms.“He’s number one with me,” says Charlie’s new fickle furry friend, who,unlike The Bachelorette, is no high maintenance bitch.  (Admittedly gratuitous, but what can you do?)