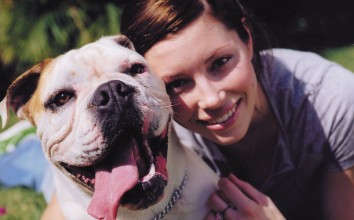 When Jessica Biel came home to find her bulldog, East, with a mouthful of pink leather and ribbons, she was so mad she had to laugh.  “I had left him home alone for an hour and he got into my closet, went into my ballet bag and took out my new point shoes.  I caught him with a pink ribbon dangling out of his mouth.  He looked up at me  with his big underbite, as if to say ‘Hmm?’ – with such a dopey looking face.”  East, an English and American bulldog mix was adopted by Biel’s beau, Chris when the two were just friends, but soonafter they became a couple – no – an inseperable threesome.  East is still brimming with puppy-ness  –  he’s very excitable – and a bit clutzy.  “He’s such a goon,” says Jessica affectionately, “he literally runs just as fast as he can and he’ll run into things!” She admits that East is a lousy judge of character, because he loves everybody.  “If you are going to pet him, he’ll fall in love with you – even if you are robbing the place!”

East was named by Biel as a tribute to the East Coast where Chris, a Massachusetts native, grew up.  The dog, though, seems to have fully embraced the California lifestyle.  At home, his favorite resting place is a dog bed made by Primative Pet, adorned with surfboards, although, Biel admits, “he sneaks up on my bed in the morning.”

Biel is best known for her role as Mary Camden on WB’s Seventh Heaven, a show revolving around the life of a Reverend and his ever-growing Rockwell-esque family.  The show, touted for its strong values and life lessons, often featured the family’s dog, Happy Camden.  East and Happy did occasionally meet, as Jessica would bring her bulldog to the set all the time, but she reports, “Happy is a little skittish and East always wants to jump and play around.  I think she was a little scared of him.”

There is nothing to fear in this gregarious dog, unless you are a flower.  Yes, flora ranks as one of East’s favorite treats.  “He’ll rip them out of the ground and eat them and continue to walk down the street,” she laughs.  So much for having a garden!

According to Jessica, East has traveled many times by plane, but it is not so comfortable for such a big dog.  Biel says, “It’s very difficult to fly an animal his size – any longer than to Boston and the sedatives wear off and he’s hungry and he has to go to the bathroom.  I try not to fly with him so much.”  Car travel is more East’s speed, and Jessica has driven him across the country, opting not to fly.  “He’s great in the car.  He sticks his head out the window and his big floppy lips flap in the wind. It’s so cute.”  When he cannot accompany the actress or her boyfriend on a trip, East stays at the Calgrove Kennels, a boarding facility that Jessica raves about – describing the inside-outside facility with grassy areas and plethora of toys East can play with.  According to Jessica, it’s the next-best-thing to having East come along with them.

Jessica Biel, best known as the preacher’s daughter Mary Camden on Seventh Heaven, thinks her bulldog, East, is a gift from above!

Jessica says she worries about some of the health issues typical to East’s breed – bulldogs are notorious for having problems with their faces due to the wrinkes.  “He has some eye problems due in part to bad allergies.  On top of that, his lower eyelashes curl in and scratch his cornea.  He’s already had surgery on his right eye but it didn’t work.  He is due to have a second surgery soon.  It’s a serious situation, but we have a very good eye doctor for East.”  More than the surgery, it’s the recovery process Biel is concerned about.  “He will want to scratch and rub his eye so he will have to wear a contact lens as an extra layer of protection as well as a cone on his head to keep him from getting to his eye. It’s is really up to us to make sure he stays sedated for the week, contacts in, cone on, no scratching and no rubbing.”

Jessica loves East and understands what is involved when caring for an animal.  “It’s such a large responsibility.  I don’t think anyone realizes how much of a responsibility an animal is until they get one.  You can’t go out all night long.  You can’t spend the night at someone’s house without making sure someone’s watching him.  It has really changed my life a lot, but I don’t think I could live without him!”

Jessica has had animals growing up, and looks forward to seeing her two family pets Freckles and Kit Kat whenever she goes home.  “Freckles is this adorable Cocker spaniel who I have had since I was ten years old.  He’s this nice little old guy who follows my mom around no matter where she goes.  I’ve had Kit Kat forever.  She’s been alive since I was six years old – we rescued her from an animal shelter.  She’s a little skittish because she was abused as a kitten.”

Biel also has a cat named Blue who she adopted from a woman in Santa Monica who was finding homes for abused animals.  “I saw this white cat with blue eyes and called my dad and said, ‘we have to save this animal.’  I took him home and now he lives with my family.”  East did get an opportunity to meet his extended family, but Biel says, “My cats didn’t know what to think of him.  Freckles liked him but he’s a little bit old and East gets so excited, Freckles was like ‘alright puppy, chill out a little bit’”  East did get to expend his energy hiking in the Colorado mountains near Biel’s family home.

Since leaving Seventh Heaven, she has explored very different roles – an indulgent vixon in Brett Easton Ellis’s Rules of Attraction, and most recently, as Erin Hardesty in the remake of horror classic, Texas Chainsaw Massacure.  She’s also the face of Loreal, changing her hair color for the roles.   She says [changing my hair color] does not affect me as a person, but it does affect my wardrobe.”

Blonde or bruenette, Biel is always concerned with saving animals and giving her own pets the best care they can get.  She is involved with Fund For Animals, which Biel says, “promotes vegetarian and vegan diets and calls for the end of hunting – especially hunting for furs.  I don’t agree with people wearing furs.”  Jessica has also found a new charity, Noah’s Wish, that has sparked her interest.  She says, “you can be trained as a volunteer to save a dog, cat – any animal – in a disaster.  You can also volunteer to foster an animal, so if a family has a dog and they had a flood or their home was destroyed by hurricane and they feel like they have to get rid of the animal because they can’t afford it or their living situation is not regular, you can take it in.  I would love to do that.”  Jessica says determinedly, “That’s what I’m going to work on next.”

For more information about Noah’s Wish, go to www.noahs-wish.org.