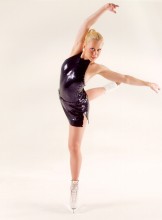 I’m a little nervous calling Oksana Baiul, figure-skating gold medalist.  It’s not every day one gets to talk to someone famous the world-over for her abilities on the ice.  So, when I placed a call for the interview and a disarmingly sweet Ukrainian accent greeted me, I was relieved.  After the formalities, I dove right in and asked her how she was.

“Good!  Good  Actually, my two puppies are running around,” she laughs.  Oksana laughs a lot; her levity is one in a list of her charming qualities.  Another quality she constantly shows is a love for her two Chihuahuas, Poopsie and Rocky, one-and-a-half years old and one-year-old respectively.  Oksana gushes when given an opportunity to talk about her dogs.

“Poopsie is a Russian name meaning ‘little doll.’ She’s a little tiny dog.  We rescued her from a store in the mall.  Then we purchased Rocky to be her companion. We wanted to name him something boyish, so we chose Rocky after the Sylvester Stallone movie.  We got him from a top-of-the-line breeder who specializes in Chihuahuas.  I love them both.  They make me really happy.”  She laughs again, and then starts to tell me why she loves Chihuahuas so much. “Some people say they’re really ugly, but I think that’s what makes them so precious.”

“Poopsie is like the baby.  She’s always good and stays with me.  Rocky is more aggressive.  He tries to protect me, he’ll bark at people he doesn’t like, and  remembers them.  But he’s sweet.  In the morning he’ll jump up on me in bed and lick me all over my face.”  We both start laughing.

Suddenly she gets serious, “One sad story, though – when we first brought Poopsie home, she was sick and didn’t eat her food.  We thought it was stress.  But the next morning, she was so sick we had to take her to an emergency room, and she was on an I.V. for days.  We found out her blood sugar was really bad; the store must not have taken proper care of her.”  “But,” she laughs again, lightening the mood, “with Poopsie we learned our lesson and then read all we could about Chihuahuas.  With Rocky we haven’t had anything like that happen.”

I try to ask her about her exercise routine with the pets, and I can almost hear her smile.  “I take them to the park.  They love the park.  They don’t get outside of the apartment as much as they should, and when they do, they just love the sun and getting exercise.”

Before I can even say a word, she begins telling another story.  “Once I was skating with some dogs at a show, and,” she begins to crack up, “I accidentally skated at one of the dogs a little too fast and confused it.  Despite its training, it ran off the wrong way.  I was so embarrassed.”  She laughs more.

Turning to her career, she proudly explains that she’s returning back to the ice.  “I’m under a lot of pressure,” she says, “but I’m returning. I’m going to Colorado soon to skate for a special on CBS.  In the fall, my real season begins.  What I like most about figure skating is its artistry.  It takes a lot, but gives a lot.”

That’s Oksana for you.  Talented and friendly, but most of all, positive – always with her babies, Poopsie and Rocky peeking out of her bag or tucked under her arm.