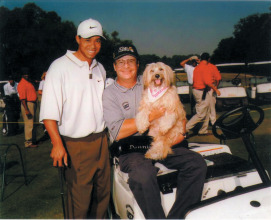 Question: in how many straight PGA Tour events has Tiger Woods gone without missing a cut?  Don’t know?  Chances are there’s a seven-year-old dog in Plantation, Florida named Benji Hogan who could answer that question on cue.  In addition to having the ability to bark out the answers to golf trivia questions (asked by such people as Jay Leno, Celine Dion and Tiger Woods himself), Benji also acts as an assistant to his owner, Dennis Walters, a pro golfer who was paralyzed from the waist down following an accident.  Walters found Benji in a shelter and trained him to be an unorthodox guide dog. Along with an acquired aptitude for trivia, Benji can bring Walters a tissue if he sneezes, howl out the words of “How Much Is That Doggie In the Window” (which he has often done with Vince Gill), and tee up Titleists for Walters on the links.

Most recently, Benji and Walters were asked to carry the Olympic Torch on its journey to Utah for the 2002 Winter Games, and Benji was inducted into the Florida Veterinary Medical Association’s Pet Hall of Fame as 2002 Companion of the Year.

When it comes to Nick, an Australian Shepherd and third generation Frisbee dog; the apple doesn’t fall far from the tree.  Nick inherited the skill from his father, Luke, who got it from his father, Dan.  All have been under the guidance of Bob Evans of Dallas, Texas.    “I got into Frisbee dog playing with Dan,” says Evans.  “We became more and more involved with the sport, which is now like a family pastime.”

Nick, who joined the team after Dan’s passing, caught on quick, becoming the youngest dog to earn a trip to the World Championship of Frisbee Dogs at only 14 months.  Now three, Nick has won the 2001 national championship and the 2001 World Cup.  Nick’s signature trick, “head over heels,” is a toppling feat that has him doing a mid-air flip while catching a Frisbee and landing comfortably on his feet.

behind each ELITE Team member can be found at www.eukanuba.com.