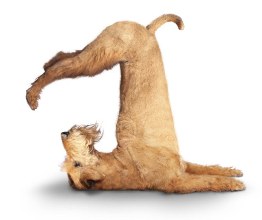 Have you ever fancied to be as flexible as your furry friend? Well, we at Animal Fair can’t promise that you will be able to jump a fence with ease or chase a ball with childlike vigor, but adopting a few of your precious pet’s habits may, in fact, increase your energy and your agility. Your pets have a lot of ways of staying fit besides just running through your house. If you’ve ever watched, perhaps after your pet wakes up, he or she usually stretches. This stretching is what Yoga aficionados across the country think is instrumental to a healthy existence. “Stretching revitalizes your muscles and when your body feels good, you mind feels good. It is only natural that wild animals realized this before humans because they had to survive in much harsher conditions,” says Yoga expert Alan Ripka of East End Yoga in New York City.

Much of yoga has been influenced by animal activity. Although cats and dogs were not highly regarded in the India to which the origins of Yoga can be traced, it is clear that the people looked to nature and the wild animals for survival and fitness techniques. The effect of wildlife on Yoga is apparent in many of the names used to represent the positions. Cobra, downward facing dog, upward facing dog, and simple fish are just a few stretches common to all variations of yoga.

Also a highly spiritual exercise, Yoga’s origins can be linked with Hinduism. The spirituality associated with the practice of yoga is another pet friendly feature of the exercise. When Lord Krishna appeared on this planet 5,000 years ago, he appeared as a cowherd boy due to is great affinity towards cows. Hindu scriptures state that the stronger members of society must give protection to weak and helpless living entities. It is believed that the duty of a householder is to protect and provide not only for one’s family, but even for the ants that live within one’s house and for higher living entities like the cow, who are at the mercy of their owners. The Hindu belief is that because we drink the milk from the cow, we therefore we must accept and protect her as our mother. Rules and regulations for Lord to protect his cows are set in the religious scriptures. And when the world disregards the rules and violates the rights of the helpless, it is believed that the Lord descends to reestablish the

principles of religion and punish the reprobates.

Zen-independence, serenity, and enlightenment-certainly seem to capture the disposition of our furry friends. Although our precious pups and kitties are unaware of the spiritual meaning behind their everyday stretches, a lot can be learned about the maintenance of a lively demeanor from watching our Zen pets. Their out of bed stretch looks a lot like downward facing dog where the energy is sent soaring from hear to toe, revitalizing tired muscles. And when they are watching a deer of a bunny, getting ready to pounce, their strength, poise, and might are reminiscent of the powerful warrior pose. Our pets have found a Zen way of life and Yoga may be just the exercise to bring your and four legged friend closer together. So catch up and get Zen-it will increase your vitality and vigor, not to mention you may not be able to catch Fido before he jumps onto the counter and eats your dinner!