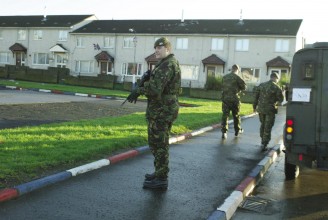 Endemic to Northern Ireland is an unusually high number of ‘masculine’ dogs wandering the streets. Some say black Labradors, mastiffs and other militant type dogs are a fashion statement. Others call them a reality encouraged by military presence in Northern Ireland. For generations, dogs warned that Irish Catholics, British Military, and Loyalist invaders were prowling at night. Military, refusing to investigate high number of canine poisonings over the years, alleged dogs were trained as canine alarms.

NCDL, National Canine Defense League, a United Kingdom animal welfare organization, is trying to make a difference on behalf of dogs living in Northern Ireland. Working to promote responsible dog ownership, the NCDL has experienced unforeseen challenges in the cultural nuances that define relationships between canines and their owners in this region.

A study sought to define the relationship between those from Northern Ireland and their dogs. An excess of 11,000 dogs in a people population of 1.7 million stray annually; 5,000 dogs are put to sleep; 6,000 dogs might rehome; 2,200 dogs may be reclaimed. One out of every 156 dog owners in Northern Ireland allow their dogs to stray.

The study found that men identified with their dogs. Devastated by an inability to secure work, a physically in tact (not neutered), aggressive, roaming dog gave them a warped sense of machismo. According to the study, having a dog was important; while caring for the dog was not. Few held emotional ties to dogs, and perceived them as disposable.  There was a widespread sentiment: ‘If they wander, who cares.’ Little loyalty was found. A dog could be replaced within days or hours.

37 year old Ronnie Milsap, spearheading the NCDL Northern Ireland campaign, is making a difference. A former Dog Warden, Milsap found diminishing support from the 26 Councils employing him. His education materials were leaflets, and there was no support for neutering campaigns. His budget, less than for cemeteries, was continually reduced.

Milsap, a dog lover, dreaded going to work each day. He knew he would have to destroy dogs he collected. Milsap was solely responsible for feeding the stray dogs and walking them before putting them to sleep.  Milsap felt he was playing God. The deaths of thousands of dogs weighed heavily on his mind.

Daily confrontational problems with dog owners threatening personal harm brought him close to a nervous breakdown. “I had no sense of a good deed done for returning a dog to its owners,” says Milsap. Promise of a City pension and higher salary wasn’t motivation he needed to go to work. The NCDL’s motto ‘A dog is for life’ was. Milsap responded to the charity’s classified ad looking to hire a Northern Ireland campaign officer.

The NCDL is focused on developing campaigns intended to stroke Northern Ireland male egos, while encouraging spaying and neutering all animals. Slowly, Milsap is helping attitudes to change in Northern Ireland.  Milsap says that he would like animal welfare investigators to work more closely with police, as he believes that there is a connection between neglect of children and animals; physical abuse and animal abuse.  This region that has historically been the site of great unrest, the treatment of animals is a precursor to an overall attitude of empathy and peace.