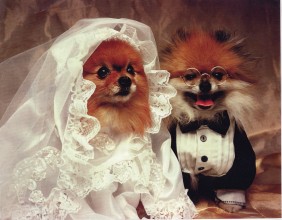 Canine companions have increasingly taken on the role of surrogate family for many celebrities with a hectic but lonely lifestyle on the road or at the movie set. So when it comes to tying the knot (granted this seems to occur three or four times for some celebrities), it’s only natural that the best man be man’s best friend!

The fall wedding of No Doubt’s rock diva Gwen Stefani to Gavin Rossdale, the handsome frontman of Bush, featured Rossdale’s beloved Hungarian sheepdog, Winston.  The all-black Winston could barely be distinguished from the other groomsmen as he escorted Rossdale down the aisle wearing a red rose-covered collar with matching leash. The wedding was featured in In Style magazine’s annual celebrity wedding issue as one of the 22 remarkable weddings of 2002. Dior’s John Galliano, who designed Stefani’s gown, said of the London nuptials, “Gwen was choked with emotion. She cried, he cried  so did the dog!”

Tears were again shed this December when John Miller, co-host of ABC’s 20/20, lost his status as one of People magazine’s Top 50 Bachelors of 2002 with his marriage to Emily Altschul.  The Emmy award-winning, broadcast journalist and his bride were led down the aisle by Altschul’s dog, a bull mastiff named Mona, who had the couple’s rings hanging from her rose-covered collar.

Some celebrity pet lovers, like Sigourney Weaver and husband Jim Simpson, opt to skip the human love mush and go straight to the real source of doggie delight and decadence: pet weddings. In January of 2000, the couple and their daughter Charlotte, then 9, hosted a wedding in their New York apartment for their Italian greyhound, Petals, to another Italian greyhound named Jimmy. “The dogs were scheduled to begin breeding soon and Charlotte started asking questions about why they weren’t married first,” says Simpson, director of New York’s Flea Theater. “I grew up surrounded by lots of dogs and my wife, who had Italian greyhounds then too, always loved dressing her dogs up in clothes and having parties, so we thought why not have a wedding? Petals wore a faux Vera Wang gown and Jimmy looked very elegant in a black bowtie. Charlotte gave the bride away and performed the nuptials, talking about the importance of commitment, in front of about 15 guests and their dogs  both species in formal wear.”

“Everyone was in the spirit of it,” says Jim,“I mean, how could you say no to this little girl so in love with the romanticism of marriage? It was all just for fun.”  Well something must’ve gone seriously right at the ceremony because three months later, Petals and Jimmy who first met while walking the streets of New York – were the proud parents of three puppies!  Jim advises those considering a pet wedding to keep it simple and fun. “The dogs were obviously not interested in the nuptials, although they put up with all the excitement extremely well. It was for us. As my dad used to say, the marriage is for you, the wedding is for everyone else. Life is filled with delightful and silly things. I’m just lucky enough to have two women in my life who are inspired by silly ideas all the time and that makes life that much better!”

Treating pets like pampered members of the family is not just a Hollywood trend. Showing your love for a pet by celebrating a special occasion is a popular, and growing, practice across the world. Florida native Shelley, who specializes in dog fashions, staged an elaborate wedding she called the Maltese Millennium Marriage on New Year’s Eve for her Maltese, Shayna, to a friend’s Maltese named Dusty. Shelley began planning the wedding four months in advance; she sent out over sixty invitations, made all the decorations, wrote the vows, and created matching clothing for all the dogs and wedding party. Italian Lasagna was served fit for a Siberian Husky (Maltese dogs are Italian) and 14-carat gold heart-shaped dog tags  inscribed with “Dusty Weds Shayna January 1, 2000” were exchanged. “Some guests thought we were nuts and actually wouldn’t attend,” says Shelley. “Afterward, when they heard about the fun time we had they were sorry. You might say we did it for attention, but we looked at it as an expression of love, not only for the dogs but for our best friends – the owners of Dusty as well. The bond that was developed between the humans and dogs is wonderful.”

Canadian dog trainers Ellie and Allison had their job cut out for them when they hosted Canada’s first canine wedding between their dogs Sampson and Emma, both Golden Retrievers, and made front page headlines across the country. The two dogs met at a commercial for Wag ‘n Train (www.kwk9.com), a training and daycare facility in Kitchener, Canada where both Ellie and Allison work, and it was love at first bark. When area businesses heard of their idea to hold a wedding between the two dogs, they donated everything from two super-stretch limos for the bride and groom to a steel drum band and elaborate tiered wedding cake – one for humans and one for dogs. Although Ellie, the mother of the groom, received some calls criticizing the event, the 100 onlookers who crowded the tent to catch a glimpse of the shaggy soul mates had a wonderful time. “Most people don’t understand that dog behavior and anthropomorphism plays an integral role in their relationship with a pets,” says Allison. Obviously there were enough fans of the event, because Ellie is planning another even bigger dog wedding later in the summer due to so many requests.

Although the dogs’ wedding was larger, Ellie had her own wedding in the fall that not only incorporated Sampson and a Jack Russell terrier, but her horse as well! “It only makes sense to include your beloved pet in one of the most special days of your life,” says Ellie. She rode her horse down the aisle and learned the hard way the importance of rehearsing with pets before the big day. “The mistake we made was that we rehearsed without the horse. So when I came down the aisle, and my sons were at the altar holding the dogs, my Jack Russell wanted to kill my horse!” says Ellie. Although she can laugh at the scene now, she stresses the importance of practicing the pet’s role in the wedding and making sure the animal is well socialized. She also suggests keeping the dog’s bowls empty before the ceremony so during the big event, handlers can keep the dog’s attention with treats and reward it for good behavior. And though it may seem obvious, don’t forget to check first with the minister and parents of the couple – not everyone is a pet lover. Lucky for Ellie, she didn’t have to worry about this since she had the same minister that married her dog!

This rule also applies to guests! When Jeff, a New York tax professional, brought his year-old Cocker spaniel to a country wedding in Vermont, the celebration lasted literally till the cows came home. As a joke, Jeff and his wife responded to the friend’s wedding invitation that there would be three guests  not two – attending the wedding.  When Jeff checked the wedding invitation response list several weeks later online, to his surprise he saw three spots reserved for himself, his wife, and his dog Si (short for Sienna). “We decided that perhaps we should call our friend, the bride-to-be, and mention that Sienna was not your typical guest. After yelling at me for a minute or two she decided it was kind of cute and called the farm  where the wedding was to be held  which gave its permission,” says Jeff. The nuptials were a breeze for Si to sit through, but the reception posed a few large problems. A group of cows were grazing about 50 yards away and Si took it upon herself to disrupt their peaceful lunch. The cows ignored her barks and stampeding attempts for a while, but then one cow started to walk towards her and the others followed. “Si, displaying more sense than the typical puppy, immediately ran back, got behind me and started her ferocious growls,” says Jeff. The cows, being better behaved than Si, and not having been invited to the wedding, only walked forward about 10 yards then turned around and went back to the pasture. “During the episode the entire wedding came to a stop while everyone stood around laughing at the brave Cocker ferociously barking from behind my back.” 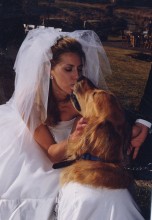 While adding your dog – or a friend’s – to the guest list can be a wonderful and memorable experience, make sure to put as much preparation into the dog’s presence as you would with other aspects of the wedding like the flowers or decorations. Tyra Banks of Eklectic Mix, an L.A. hot spot specializing in home decor and fashion accessories (including special occasion merchandise for pets), admits that dealing with pets on the most important day of your life can cause many mishaps for the unprepared.

Here are  some of her pet-friendly wedding preparation musts:

• Find out if the facility allows pets. Churches, temples, gardens, or other rented facilities often have strict policies regarding pets.

• Designate someone to manage the pet after the ceremony. Check that the area the pet will be kept in at a rented facility is well-ventilated and well-lit. If the pet will be alone, have plenty of its favorite toys available.

• Bring the pet to the dress rehearsal dinner and see how is responds to the people and situation.

• Make sure the pet is suited for the role it plays. The most common roles for pets are those of ring bearer, flower attendant, and bride escort. But if the pet isn’t comfortable in these situations, find something else and cut the risk factor out. Tyra says, “I once worked with a client who had her Great Dane act as the hostess of the reception. She was the perfect choice to greet guests at the door because she was so clam and low key.”

• Keep the pet on a collar and lead at all times – especially when walking down the aisle. Tyra adds, “We recommend a four-foot lead for better control of the pet and less pew-wandering!” A wedding is a highly charged event and pets are very sensitive.

• And the number one rule – do your research and practice!

Eklectic Mix pet merchandise includes special occasion collars, ring bearer pillows that can be specialized for the pet’s needs, hair barrettes, fabric flower attendant baskets, and dog leads. “Involving pets in a wedding is so special to begin with. I have seen way too many wedding photos where the pet has on a lovely outfit or collar only to be walked down the aisle with a black nylon dog lead,” says Banks. “All eyes will be on the pet when he or she makes its grand entrance. So be sure that the entire ensemble is pulled together.” For more information visit  www.eklecticmix.com.

Looking for a pet-friendly and romantic place to celebrate your wedding or renew your vows? The Paw House, www.pawhouseinn.com, located in south central Vermont, is an 18th century farmhouse with first-class accommodations for both two and four-legged guests. The Paw House Inn boasts three beautiful acres of countryside for an outdoor reception and will cater to every need of owners and their pets to make the experience unforgettable.