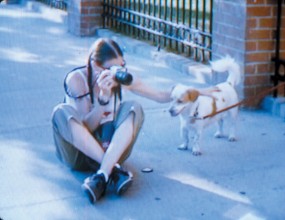 What would your pup pick to decorate his doghouse?  Laura Sue Philips knows. Her abstract photographs are geared for quadropeds, reflecting life as they see it.

“I was born in Santa Barbara and never went south from there. ”

“My father turned to art.”

“He was a Marine Biologist. We had snakes, lizards monkeys and dogs.”

“The B.F.A. in printmaking from California College of Arts. Then a painting M.F.A. from Hunter.”

“I came to New York thirteen years ago…”

“I teach at Hunter College. Also the New School.”

“At the New School, I have a lot of professionals. I’m dealing with people who may never take an art class again.

“A lot of them have huge fear.”

“I’m encouraging them to do things their parents and teachers told them not to.”

“At Hunter, I get a lot of students not originally from the U.S. They may have come when they were ten or fifteen.”

“Their parents do not understand art or want them to go into art.”

“It was two weeks later. I was looking for love in the shelters. My boyfriend and I went to Bide-A-Wee.”

“Napoleon was ten months old. They didn’t know too much about his history.”

“Jack and Corgi, maybe some spaniel.”

“He was sick, depressed. I fell in love with him.”

“My boyfriend said ‘Any dog but that one.'”

“Every day I took a bus to Bide-A-Wee and took him for a walk.

“I didn’t want him to think I was leaving him after we had found each other.”

“For years, I was making these abstract geometric paintings, participating in this whole dialogue of geometric abstraction.”

“After September 11th, I stopped painting. It made no sense for me to do these objects. I lost my love for it.”

“Teaching and walking the dog was pretty much all I was doing.”

“With animals you are never alone.”

“I had been mulling site-specific paintings on the street. One day, I just started.”

“I take photographs after I make them.”

“They get thrown out right away.”

“This is sort of a thumbing my nose at the corporate art establishment. That feels really good.”

“My reputation is changing because of it.”