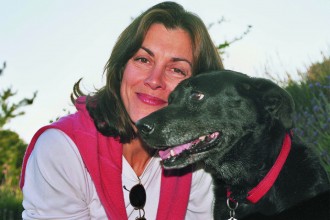 No one would think that Nina Van Horn, the politically incorrect and often downright mean ex-model turned fashion editor on NBC’s comedy Just Shoot Me would have a soft spot for animals, but apparently she has the hidden ability to calm down horses. “They wrote this into the storyline because they knew I was a horse person,” says Wendie Malick, Nina’s portrayer on the show. “One year Jack (her boss on Just Shoot Me) bought a race horse and it was out of its mind. No one could calm it down so they brought me (Nina) in because I’m a horse calmer-downer.”

Wendie is not just a horse person. In addition to her two horses: Cassidy and Mikey Rose, she has three dogs: Ned, a black lab mix, Cheetah, another lab mix, and Louis, a German shepherd mix. She also has a cat named Woody.

Living in the mountains outside of Los Angeles with her husband Richard, a builder, Wendie finds that all her pets have plenty of space in which to play. “They are so lucky that they can live free on 40 acres,” she says. Of course, there are concerns with having her animals live in the wild: her pets can encounter coyotes or rattlesnakes. Wendie has had to deal with several issues as a result of their outdoor life, but she figures in the end, it is worthwhile for her pets. “We figure even if their lives aren’t quite as long because of the danger, they have such a fun, fabulous life.”

The sunny southern California weather is also wonderful for Wendie and her pets.  When she doesn’t have to work, she spends her time outdoors with them. Originally from New York, Wendie traveled the world as a model, before settling in California. She says she does not miss the cold.  She has loved her time on Just Shoot Me.  “We have a great team over there. We are incredibly lucky.” But despite all the work, the actress still has time for her pets. “We don’t have kids, so we can use  that whole extra hunk of time to smother our animals with affection and company.”

While Wendie has always loved dogs, growing up with a collie named Bonnie, she came to horses late in life. “We were at a silent auction for a local school and I bid on English riding lessons and won them,” she says. In true Nina Van Horn style, Wendie admits, “And I have always loved the clothes.”  Charity and a love of clothes brought Wendie to horses, and she has had them ever since. She even had the opportunity to experience the birth of one of her horses, Cassidy. She slept in the stable for three nights waiting for the mare to give birth. “We slept in the hayloft. Richard made me a little bed there and gave me a cell phone and a lantern and a bucket to pee. Finally, I heard her water break and went down to her stall and there was this perfectly formed little white horse.  It was amazing.”

Besides owning animals, Wendie works to help promote their rights. She is involved in the SPCA and is on the board of the local Humane Society.  While she admits to not being perfect, sometimes eating fish or wearing leather, she understands that we could all learn how to be kinder to our four legged friends. “If we could be more sensitive we could make choices that help prevent cruelty,” she says.  Her generosity is not limited to the animal world. Wendie is also on the board of the Environmental Media Association, supports a medical center in Congo, and has a share of an orphanage in Tijuana.