Entertainment Tonight’s Maria Menounos gossips about the A-list in her own home: Apollo, Baby, Benny, and Noelle 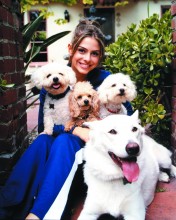 You know the music – the second you hear it like a Pavlovian dog you grab a snack and a drink and you sink into your favorite chair, ready to hear all the celeb news, gossip, what’s hot, what’s not, and what happens behind the scenes of your favorite sit coms and movies.  She’s there with you every step of the way – this twenty-something Greek beauty – Maria Menounos.  The poised host of Entertainment Tonight has interviewed countless celebrities, and if she’s not on the red carpet, you’ll likely find her on her living room carpet cooing to her beloved pets: Apollo, a white German shepherd, Baby and Ben, her Bichons, and Noelle, a miniature poodle.  I caught her right before sweeps, one of the busiest times for those in the entertainment industry, but there was no hint of rush as she sat on her couch, surrounded by her pets, eager to dish a little about them.

Baby, she says, is the smartest, whereas Benny is a little pig, Apollo is the sweetest, but protective and Noelle is a queen.  “If she could be, Noelle would be Scotch taped to my side,” quips Maria.  “When I take her out and we come back home to the others she looks at them as if they are peasants.  She seems to have lived on a pillow all of her life.”  Apollo, the white German shepherd, “requires the most love.  He is always jumping up to give hugs.”  He’s also the host’s hero.  “I went away to co-host the Miss Teen USA Pageant and Bennie fell into the pool.  A friend saw it happen and before he could rescue Bennie, Apollo jumped in and saved him!”

Like a proud mother, Menounos remembers when Baby had her first birthday.  “I had a birthday party, just with my family.  I bought a vanilla cake and a balloon that read ‘Happy Birthday Baby!’  The woman at checkout thought it was for a child.  I was so embarrassed, I ran out of there.”

Loving animals is nothing new for Menounos, but having them is.  “I grew up in a very strict Greek family.  My father didn’t believe in having animals in the house – he didn’t want to clean up after them.”  Having to make due with stuffed animals (“while other girls my age had posters of bands and movie stars, I had my stuffed animals.”), she adamantly said to her dad, ‘someday I’ll have lots of dogs!’” She got that one right but what she couldn’t foresee was that once she adopted all of these pets, her parents would have a change of heart.  “They just came to visit.  They fell in love with the dogs – they now call them ‘our grandkids’ and cried when they left them.”

Maria keeps a close relationship with the Glendale Humane Society, where she adopted two of her ‘chickies’ (her pet-name for the dogs).  Before she started on Entertainment Tonight,  she spent a lot of time at the Humane Society, walking and playing with the dogs.  She proudly says, “there was one poodle,14 years old that really didn’t belong at the shelter, named Prince Henry.  He was always shaking.  I thought they were going to put him to sleep, so I found a friend who would give him a home.  He’s now a very rich and happy dog.”  Forever concerned with the homeless animal problem – particularly visible in LA, she guesses, “because of the transient nature of the city,” Maria created her own charitable organization Take Action Hollywood which urges celebrities to take part in philanthropic endeavors.  “We are doing this big ad campaign, sort of like the Got Milk? – hip, fun – but for the purpose of drawing attention to the problem of stray and unwanted pets.”