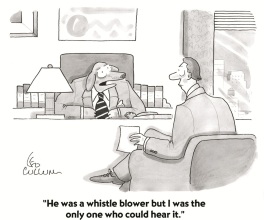 The witty dog and cat cartoons of Leo Cullims have won over fans across the globe. Some may recognize his cartoons from The New Yorker, but he’s also been published in countless other magazines and periodicals, including the New York Times and the Harvard Business Review.  He’s able to relate quick-talking professionals in sharp suits to dogs in such a seamless manner that one might ask which is the object of satire – the business or canine community.

These days, Leo Cullims work is widely known, but this was not always the case. In 1970, he decided that he wanted to paint. In order to make a career of it, however, he realized that he would need a marketing strategy and outlet. After some consideration, Cullims came across a book of cartoons.  As a cartoonist, he could couple his images with humor, and at the same time make a reliable profit. Of course, entering into his new career was no simple task. First Cullims needed to teach himself the general cartoon format and then develop his own unique distinguishable style, which he’s known for now.

His Labrador Retriever, Whinni, has provided inspiration through both her intelligent personality and her physical characteristics. Some may recognize her as the model for many of his cartoons!  Cullims often found it interesting that humans and dogs or cats are able to co-exist so well and “… that we live with another species and seem to enjoy it.”

When asked whether it was initially difficult to get his work published, Cullims responded that he “…liked the writing aspect and liked the drawings and sending them away to publishers.” For this reason, being a cartoonist has always been an enjoyable experience for him and success came almost naturally- because the effort behind it was fun.

Surprisingly, though, Leo Cullims has been able to pursue another interest with equal passion: For over thirty years (beginning in 1968), he’s flown commercial TWA airplanes as a pilot for American Airlines.  Although the two careers might not seem a likely pair, they do demonstrate that the sky’s the limit when it comes to Leo Cullims’ talents.