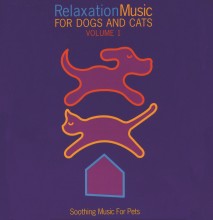 “We live in a plug and play society.  Kids adjust to the technology and the pace, we can just put them in front of video games, but dogs, they’re in the same old world and you [the owner] have to put the time in,” says dog trainer Arman Rabuttino of Just Dogs Records.

Since the advent of technology, human interaction with people, things, and animals has shifted toward the convenient.  Many pet owners expect their dogs to behave like PDAs or DVDs.  Turn them on, tell them what to do and they do it.  But, surprise, we still have to train our dogs.  They do not come housebroken or ready to roll.  And the less time we spend with our dogs, the worse they feel and the less they listen.  How can we juggle our busy lives, yet still ensure our dogs’ emotional and physical well-being?

Arman Rabuttino, the “Guinness Book of World Records’ (1984-1992) “World’s Fastest Dog Trainer, and Rich Parker of Just Dogs Records, have discovered a solution: music therapy…for dogs.  They have produced three CDs: an entertainment CD, “Favorite Melodies 2010,” used primarily for training, “Touching Tunes 2000,” for tightening that bond with your pooch through massage, and a Christmas CD, “Holiday Favorites 2000.”  My six year-old bulldog who now lives for the “Touching Tunes” CD and I can personally attest these CDs work like magic.

Rabuttino has been training dogs for most of his life and has been a massage therapist for over ten years.  Parker, who has over twenty-five years experience in various technical fields and owns a pet merchandise and grooming store, is the CDs mastermind.  And when it comes to knowing the quirkiness of dogs, both are veterans.

In Rabuttino’s experience, “the number one thing dog owners complain about is, ‘my dog won’t listen.’  I hear it over and over again.  If a dog doesn’t listen, then a dog won’t do what it’s told.  And when a dog doesn’t do what it’s told, the owner gives it away.”  This lack of patience with dogs and failure to train dogs leads to an overwhelmingly large stray dog population.

It is this orphaned dog problem that drives Rabuttino to adopt his training to suit each dog.  Often trainers develop one style and stick with that style.  If a dog is untrainable with a trainer’s style, then it is categorically an untrainable dog.  For Rabuttino, however, “it’s not important that I can go into a house and train a dog.  It’s important that I take all of the methods available, such as subliminal sound, obedience training, the new shocking collars, stimulation colors, and I learn what the dog responds to and listens to. And if a technique doesn’t work, the owner can call me and we’ll try the next one.  And this means the owner has to take it seriously”

This CD is especially useful with a new dog or an adopted dog.  You can immediately create an intimate dog-owner relationship and help smooth a puppy’s transition into the harsh world or curb the emotional trauma an adopted dog may have experienced.

Now, how exactly do these CDs work?  The idea first popped into Parker’s head when he overheard a customer talking about how his dog would listen to music he was playing.  Parker called a couple of recording studios, and one man who had dabbled with frequency said it would be impossible to make music with frequencies dogs would respond to.  Following Thomas Edison’s credo, Parker “would not give up until he absolutely knew it was not doable or it was impractical. “Rabuttino and Parker decided to go into the studio themselves and make a demo.  “We made the demo and brought it back to the shop.  As we were grooming the dogs, we would play it and watch how the dogs responded.  When they listened, we knew we had found the right levels.  We went back and forth between the studio and the shop until we found all of the right levels.  And each CD has different frequencies and timing patterns for different jobs [i.e.: training, relaxation, etc.]”

Not only are these scientifically produced CDs good for dogs, the music people can hear it isn’t bad.  In fact, “Favorite Melodies 2010” the training and entertainment CD was nominated for the Remixer of the Year Grammy in 2000, making the record books as the first CD for dogs to ever be up for a Grammy!

To order these CDs or find out more about Arman Rabuttino and Rich Parker visit their website at www.justdogs.com.