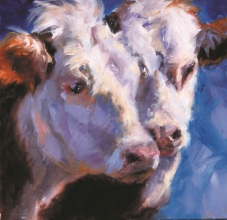 Representational art, as artist Linda St. Clair describes her work, is a rendering of recognizable objects, figures, or elements in nature.  In her piece entitled “Looking for Shade,” it is apparent that four wooly sheep are the heat weary looking to cool off.  And in “King of Queens” we know the one wearing the crown crows at dawn.  And yet within her depictions of ovine expressions and avian struts, it is also St. Clair’s understanding of these animals that is recognizable.

Originally from a farm in a small town thirty miles south of Nashville, Tennessee, St. Clair grew up with animals.  “I loved the animals.  I had pet goats, pigs, and calves.  But we also butchered our own meat, which, to me, was really devastating.”  Linda’s job, feeding the chickens and gathering the eggs, wasn’t work she was interested in making a career.  She wanted to be a city a girl.  The attachment she developed to these animals, though, indelibly lingered, as they began to emerge on her canvases when she picked up the brush.

“As a child, I wanted to be an artist, but I had no role models on the farm.”  Following her dream of the city, St. Clair moved to Dallas  where she studied marketing and had a family.  At times she would try her hand at painting, but never had the time to devote to seriously pursuing her interest,  “I would take a workshop, paint something and then put it away.” It wasn’t until ten years ago, after having remarried an artist that she began to ardently become a painter.  “I was surrounded by art.   My husband was an artist and I was old enough and experienced enough then to focus on painting.”

When she first started painting it was somewhat of a struggle, but also a release.  “It all came out in a big rush of frustration.  I was in a hurry. I wanted to bypass things like perspective and drawing.”  Once the initial flurry of emotion and eagerness subsided, St. Clair could focus on the techniques of her trade.  “My husband was a great teacher and after a year I began to settle down and learn the fundamental tools.”

“At first I painted some landscapes, but gradually the animals started taking over.”  The farm animals she tended to in her youth, the chickens she used to feed, returned to become the inspiration for the animals that are now her artistic subjects.  What is it about these animals that drive St. Clair to capture them in oils?

“Animals are a lot like people in their expressions.  They have unique features, comical, inquisitive, and sometimes ugly.  They have personality.”  To illustrate these idiosyncrasies in her work, “the animal fills the image area.  The background is abstract color to bring the focus on the animal.  The color on the animal is often exaggerated to give the animal life.  I’ll paint a sheep, that looks white, blue.  And these are colors that are all in the animal.”  The colors in an animal’s environment come to play on the animal and through St. Clair’s keen eye and deft stokes, we see not an animal in an environment, but the environment in the animal.

When painting, St. Clair works almost extemporaneously. In an article for Artists Magazine entitled “Animal Magnetism” she says, “usually I’ll try to put in my darkest dark and my lightest light and that will give me a range of values to work within.  Then I work over the entire canvas and try not to get caught up in one little area I want to keep loose.  I don’t like to rework major parts of my paintings. One of the things I feel is a strength in my work is the looseness and the spontaneous feeling, so I don’t want to jeopardize that.”

While it now seems Linda’s style with abstract backgrounds and colorfully depicted animals has been with her since she first dabbed brush in paint, she actually had to work at it.  “Sergei Vongar, a Russian painter who lived on the West Coast, was a teacher that many older artists studied with.  He said, so many artists, when they first start painting, before they have even really learned how to paint.  It was the same for me.  I wondered what my style would be, how I would paint.”  Style for St. Clair  is intrinsically subjective.  In art, she says, “you can’t cover up who you are, even if you try.”

It’s no surprise, then, that some of St. Clair’s influences boldly emerge in their work.  “My influences…I’d have to say Van Gough.  I like work where I can see the artist in the painting.  Also Monet, but really Van Gough.  I can see how much of Van Gough is in his work.”  And one doesn’t have to look long at St. Clair’s work to see how much of St. Clair is revealed.  In the foreground of almost every piece, before the eye has a chance to drift into the background, we see a bovine question or an ursine lumber colored by St. Clair’s inimitable style and vision of the animals’ world.

Fortunately, for those of us who want to immortalize our furry friends as if they were royalty, St. Clair paints pets.  “I’ve done quite a few paintings of other peoples’ pets.  More dogs than anything.  If I can’t meet the pet I’ll have people send me pictures so I can get an idea of its personality.  But it’s better to spend time with it, to get to know it.  I want to represent the character of the animal.”

St. Clair also has pets of her own.  Unable to resist the rural life of her youth, she now owns a small 80 acre ranch in Monte Vista, Colorado.  “I have a Springer Spaniel named Wyle B., a couple of horses and I’m starting to collect a few more farm animals. There are many animals around.”

As for showing her work, St. Clair has been in galleries around the country and world.  She has had two shows in Japan, showed with Salma Gundi and Allied Artists, and with the Lee Lockey Gallery in Wisconsin. Her work is in a collection of wildlife in Jackson, Wyoming. She has been invited to be a part of the animal society in New York, and the list goes on.  Her most recent show was the last weekend in September at the Buffalo Bill Show at the Buffalo Bill Museum in Cody, Wyoming.  And if you can’t make it to any galleries or museums you can view her work on her website at