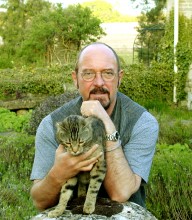 “Sometimes it’s the unexceptional ordinary little guys that stay with you the longest, like the old black cat mentioned in the song,” answered  Ian Anderson, lead singer and flutist of the seventies rock band Jethro Tull, when asked about a favorite pet. Ian Anderson has just released a new solo CD entitled  “Rupi’s Dance”, named after a feral kitten that his family adopted. Anderson’s new release, a blend of images and Celtic/Middle Eastern influenced folk rock, contains a couple of animal friendly songs, including one about an old black cat that called Anderson’s “farm in the southwest of England home.”

“The Old Black Cat” was one of the least demonstrative, least interesting creatures, he was just there, an old black cat.” The song is both a dedication to the old black cat but also serves as a personal reminder for Anderson that “all animals, people and things are more worthy of attention, respect and acknowledgement than I give them.” Good reminder for all of us.

Anderson has an intellectual fascination as well as a fierce love of cats. He explains that cats are the one species that meanders between the parallel worlds of wild and domestic. Anderson’s relationship with felines is “protective, helpful and practical.” On the Jethro Tull website  you’ll find an entire section entitled ‘Wittering on About Cats,” filled with personal writings and information along with links about small wild cats. Many of these wild cats are in need of protection, including the Andean Mountain Cat, “one of my favorite mystery cats,” which has recently been photographed for the first time.

Anderson also offers his advice on how to raise kittens, and has saved more than one litter of abandoned newborns.  Anderson has a special skill in raising feral kittens, “hissing spitting balls of fur that hate people until fed for a week.” He has been a big supporter of the Fund for Animals in their Campaign to Spay and Neuter Cats and Dogs.

Although Anderson does not consider himself an animal rights activist, he finds the cruelty toward animals in this world appalling. He believes that the key is educating the international public in hopes that it will force governments to act in protection of animals.

Anderson’s interest in animals may in part be due to his contemplative nature. His siblings being many years older, Anderson grew up alone, and found an affinity with animals greater than what he felt with humans. When not on tour or in the studio, you might find Anderson wandering through the woods with a cat balanced on his shoulder.

“Rupi’s Song” is the title track of Ian Anderson’s new solo CD. So, who is Rupi? Take your pick!  According to Anderson, Rupi is a rescued runt of a feral litter, a study in the personification of animals, a study in male and female archetypes of sexuality, and the Hindu name for beauty.

Asked whether his animals enjoy his music Anderson noted that, “the dogs hate the flute, the cats pay no attention, and the horses, sheep and chickens don’t seem to have a clue.”