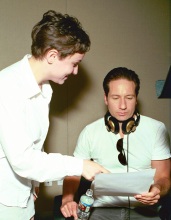 What do David Dachovny and pet overpopulation have in common?  A lot more than you think.  David is currently hosting a documentary called Best Friend Forgotten whose main focus is the ever-present problem of pet overpopulation.  Pet overpopulation you say!? I didn t think that was a problem?!  Think again and consider this frightening statistic.  IF WE WERE TO RID OUR CITIES OF PET OVERPOPULATION, EVERY HOUSEHOLD WOULD HAVE TO HAVE 9 PETS.  That is a very serious problem if you ask me.  Now you can understand the importance of such a documentary.  The film follows a cat and a dog through the rescue process and then eventually and hopefully through to the adoptive stage.  I don t know what happens to these animals and neither will you until the movie tour which will be hitting 22 cities, comes to you for their local screening.

The organization which produced this film is called Give Voice to Animals and they will also be in charge of the premiers and tours throughout the country.  30 to 50% of the proceeds from ticket sales go directly to the shelter you choose to donate to when purchasing your ticket.  The rest of the money goes towards funding the events which cost approximately 30,000 per city.   Give Voice to Animals was created with the specific task of helping to find a solution to pet overpopulation.  GVA encourages the viewer to take a more active role in thier communtiy regarding this issue.  For this reason, they will have a vast variety of shelters and other animal welfare specialties represented at these premiers to provide the audience with knowledge and an opportunity to help.  GVA would like their audience to have as many options as possible to connect with the organization that fits their needs.

The program of events for each city’s tour will be basically the same.  The lobby at the events will contain booths from your local city animal organizations who are most knowledgeable in the area of pet overpopulation and what it is that can be done about it.  There will then be a VIP reception exclusively for the press, celebrities, and others with VIP passes.  During this time a private silent auction will also be held.  Following the VIP reception is the pre-show where the animal organiztions will be present to answer any questions on the specifics of your city’s pet overpopulation problem, what steps you can do to aid in the solution of this serious dilema, and what preventative options are available.  Finally, the screening will be emceed by local celebrities in each city.  There will be a suprise comedy presentation, a screening of Best Friend Forgotten, a big ticket item auction, and an introduction to Julie Lofton, the executive producer and director of the film.  Following the screening will be the post party where the posh meet the posh in an effort to be seen and the ever anticiptated blooper reel will be shown.  There will be a mixture of celebrities, film buffs, animal lovers, and well just about everybody.

Give Voice to Animals will be premiering on December 10th at Carnegie Hall.  I wish I could tell you more about the film but when I interviewed director Julie Lofton she stuck to her guns about not divulging more than a sentence or two about the film – even after I persisted and begged for a tiny snipet as to what the ending held in store for the animals featured in the film.  No copies will be released before the screening as they also have contractual agreements with PBS and Discovery Channel regarding distribution.

This event sounds like it is going to be a lot of fun, and what s better than fun with the purpose of helping animals.  If you want more information on the documentary or other projects Give Voice to Animals is currently working on, you can visit their website at www.givevoicetoanimals.org.  If you would like to purchase tickets for the event, they vary in price and what you re given access too.  Basic tickets are $25 and that includes the pre-show and the screening. There are also more expensive tickets ranging up to $1000.  The details for the ticket sales and what you are entitled to with each ticket is outlined on their website.  See ya at the show!!