A Step up for pets, and their owners too. 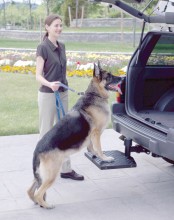 Nothing is worse than the look on your dogs face when you’re leaving the house and for some strange reason he is staying behind.

Of course you can avoid upsetting your canine pals by taking them along when you hit the road, but what if your pup has a mobility problem due to age or disability. Since the American public has voted to do their happy motoring in large high riding SUV’s and trucks, your options for getting that 80 lbs. plus friend into your ride basically boils down to hitting the gym for more upper body strength or more likely buying a long, heavy, awkward ramp.

Dan Knodle found himself in just that predicament when his two year old German Shepherd, Orion, developed bad elbows and was no longer able to jump into the back of his Chevy Tahoe. Knodle and his partner Gary Bang set out to build a solution.

“Most ramps weigh between 15 and 20 pounds, doesn’t sound like much unless you have to pick it up out of the vehicle and then put it away every time you want to let your dog in or out of your SUV.” Knodle adds, “One of the first things that was clear to us was that any product we developed needed to be very easy to use.”The solution came in the form of Twistep, a sturdy platform that mounts in the tow hitch receiver found on just about every SUV sold today. The patented product swings out to provide a 20” X 16” non-skid surface that will support up to 500 lbs. Perfect for low stress vehicle access for even the beefiest pets or owners. When your dog is loaded into your SUV the Twistep requires only one hand to operate the swing and lock mechanism to store the step under the rear bumper.

Twistep has a suggested retail price of $149.95 and is available at retailers listed on the Twistep.com website.

Suzuki and ASPCA team up for safer pet travel

You have probably ridden behind them on the highway. You know the guy that thinks his dog loves bouncing around unrestrained in the open bed of his pickup truck, and how about the lady that thinks its just fine for lil’ fluffy to ride on the rear hat rack looking out the rear window of her sedan, cute right?

It’s all too common scenarios like these that inspired the American Suzuki Motor Corporation to create a series of ten public service announcements, (PSA’s) that offer a review of pet safety tips for the road ready family heading out on a highway adventure.

Car manufactures are always tasked with providing a safe environment for vehicle occupants, Suzuki takes it a step further including the family pet according to Cam Smith Arnold, VP of Customer Relations and communications, “Far from just showcasing Suzuki’s pet-friendly vehicles, these PSAs do a tremendous job educating pet owners about the vital but simple steps they can take to ensure for the safety of their companion.”

For a dose of street credibility Suzuki tapped American Society for the Prevention of Cruelty to Animals (ASPCA), Special Investigator Mark MacDonald as talent for the informative segments. Macdonald a grizzled 29 year veteran has seen it all on the streets of New York, from careless dog owners leaving their pets locked up in a car on a summer day, to losers that make money off of fighting dogs. He is also a regular on Animal Planet’s “Animal Precinct.”

According to MacDonald, the most common mistake travelers make is not properly securing their pets, “The animal is loose in the car, the husband has to slam on the brakes and now we have a bullet flying into the front seat, the dog gets hurt, the people get hurt. We prefer the dog to be in the back seat in a harness.” Number two on his list of what not to do with pet motorists includes the often seen dog with his head out the window. “First of all it’s dangerous to the dog because of objects and road debris that he could get hit with. There is also the possibility of nasal and upper respiratory infections as well as ear infections from the wind and cold air.”

A quick scan of the PSA topics includes items that you might not think of, like bringing along a picture of your pet in case he or she gets lost and if your canine friend is in a crate, add a pillow case or article of clothing that has the owner’s scent, it will keep your furry traveler happy and reassured.

Cam Smith Arnold says beyond the PSA’s Suzuki is also incorporating pet friendly features in vehicles like the Aerio SX, “Pets appreciate the removable bucket that doubles as a food or water dish, while guardians enjoy the peace-of-mind of a rubberized cargo floor surface which allows for easy clean-up after muddy rest stops.”