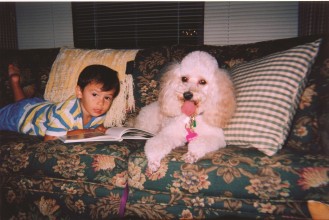 Learning to read can be difficult for many small children, and the stress of performing for teachers or fellow students can make it even harder. For many of these students, having a best friend to practice to without fear of criticism gradually makes it easier for them to read in public. With the start of this school year, Bide-A-Wee has made it painless for reticent students to rise to this challenge with the introduction of the quickly spreading Reading to Dogs program throughout the New York area.

The program improves the reading skills of children by working with pet therapy dogs and their handlers. Experts in the literary field have found that children with reading difficulties are often intimidated by reading aloud in a classroom setting. This often leads to both academic difficulties and decreased self-esteem. Children reading below grade level can now read aloud to animals in a setting designed to foster learning and interaction. Ann Cohen, Vice-President of Bide-A-Wee, reports that although still in their infancy, initial evidence from programs in other states is heartening. “Although large studies haven’t been done yet, the anecdotal evidence is that the program is quite successful,” she states. “Children have improved their reading skills, and they also get the proven physical and psychological benefits of interacting with a dog. Reports indicate increases in self-esteem as well.”

The New York program stems from earlier programs established in the United States. In 1999, Intermountain Therapy Animals of Salt Lake City, Utah founded their Reading Education Assistance Dogs (R.E.A.D.®). Using dogs of all sizes and breeds, the program was a resounding success. It spread quickly to Oregon, Texas and Florida, where it met with similar results. Dogs have long been used in therapy, but it appears that this is the first time they have been methodically introduced into literacy programs. According to Intermountain Therapy Animals, “In fact, there is documented evidence that people have read to dogs before, but (we were) the first to build a structure around this concept and develop it into a true literacy program with models for schools, libraries and other settings.”

Joan Stoppa, the manager of outreach and education at Bide-A-Wee’s Wantagh shelter, read about the success of the Salt Lake City reading program and brought the idea of such a program to the board’s attention. Says Cohen, “We did some research and decided that it was a natural for Bide-A-Wee.” Bide-A-Wee found funding for Reading to Dogs from the Alex Benjamin Norris Memorial Fund, which was established in memory of a Long Island animal lover who died from a genetic disorder at 16. Additional funding came from Estée Lauder, and Child Magazine agreed to donate a supply of books. Bide-A-Wee introduced the program earlier this year in New York City, Public School 20. According to Cohen, “We are already working with several Long Island libraries, and have had a couple of group programs that were very successful.” Currently, the organization is working to finalize plans to expand the program to a Long Island school and the Westhampton library.

With careful attention and support, everyone’s best friend can become an instrumental ally in helping children learn how to read. Programs like Reading to Dogs and R.E.A.D.® are rapidly expanding from coast to coast, and offering more children each month a chance to increase their potential in a new and fun way. Who better to provide them a leg up in life than a friend who has four to give?