You’ve seen this budding starlet on calendars, books and greeting cards. So, just who is this sensation?  It’s Zelda, a loveable English bulldog and professional model. Move over Elle, Heidi and Cindy-Zelda’s taking center stage, even if she has to waddle over.

She may drool, but 5-year-old Zelda already has a vast portfolio. This loveable pooch is the face of Zelda Wisdom, a line of humorous greeting cards, calendars and books. Photographed in hilarious costumes, this bulldog is quite a ham. She loves to strike a pose, and by doing so, changed Carol Gardner’s life forever.

Gardner, of Portland, Ore., purchased Zelda after a difficult divorce. Gardner jokes she had two options, “get a therapist or get a dog.” So, she chose option number two, and a star was born.

The idea for “Zelda Wisdom” came from a simple photograph Gardner snapped of young Zelda. There was something about Zelda’s soulful expression that Gardner could relate to-actually, that anyone could relate to. “She represents how we feel,” Gardner said. “Zelda is us.”

Zelda Wisdom contains catchy-one liners, created by Gardner, a former creative director for agencies.  One image depicts Zelda sporting a daisy-shaped headband around her head with the caption “Smile…it could be worse!”

“These cards make you feel good. You just want to laugh when you read them,” Gardner says.

Most of Zelda’s adorable outfits actually belong to Gardner. (By the way, Zelda wears an adult small, and her measurements are 32-32-32.)

The words of advice and humor supply the philosophy behind Zelda’s name. “I liked a ‘Z’ for her name, because what seems like the end may actually be the beginning,” Gardner explains. That true-to-life quotation is also one of the Zelda Wisdoms, of course!

Currently, the book,  “Zelda Wisdom,” is a top-twenty best-selling gift book at Barnes and Noble. Future plans for Zelda include 2 more Zelda books, a line of dolls, figurines, calendars and much, more. The book Zen of Zelda should hit bookstores this spring. 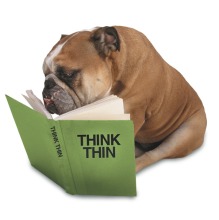 Recently, Zelda ’em-barked’ on a road trip from her home in Portland to New York City.  “We were looking for examples of American patriotism across the U.S.,” Gardner says. Zelda posed for photographs along the way, showing off her national pride. During the trip, Zelda celebrated her Thanksgiving dressed as a pilgrim, with a meal at the Big Z diner in Ogden, UT.  It was an appropriate stop for the two, as Big Z is Gardner’s nickname for her pooch! Zelda also visited an Air Force Base in Nebraska, in honor of her father, a military bulldog.  To mark the end of her journey in New York, she was invited to appear on Good Morning America where she (and Gardner) reflected on their trip.

In the wake of the national tragedy, to reaffirm national patriotism, Zelda’s website, www.zeldawisdom.com, sells a “Tough Times never last; Tough people do” poster.  The proceeds from the sale of the poster go to families of Sept.11 victims.  One news program referred to the enterprising bulldog as, “Our Mascot into the Millennium.”

Zelda is not only (unconventionally) beautiful and big-hearted, but she’s smart too.  She has a degree from Harvard University.  Well, sort of.  In responding to a letter asking for recipes from the families of Harvard students, Gardner wrote out instructions to make a flavorful dish and then tucked in a photo of ‘Chef Zelda’ bearing the caption, ‘When you can’t take the heat, stay out of the kitchen.’  When the University called Zelda to offer her a “pet-degree” from the Harvard Food Services, Gardner jokes, “I thought they were going to tell me I forgot to pay a bill.” Rather, they phoned to rave about the photograph of Zelda and honor her with the accolade.

Aside from Zelda’s human-like charm and personality, the supermodel also loves Haagen-Daas Ice-Cream bars, and even knows where they are kept in the photo-studio.

It may come as no surprise that Zelda’s favorite costumes are her queen costume and her bikini. “She loves being at the center of attention,” Gardner says of her affectionate friend. According to Gardner, Zelda doesn’t fuss about getting dressed up. “And her bikini makes her feel pretty. She prances around in it.”

A bulldog in a little bikini? It may make people laugh, but Zelda loves how she looks and who she is.  She is self confident, and breaks traditional supermodel standards.    She rubs a little of her spirit off on everyone around her.  And that is what Zelda Wisdom is all about.

For more information on Zelda, visit her website at www.zeldawisdom.com