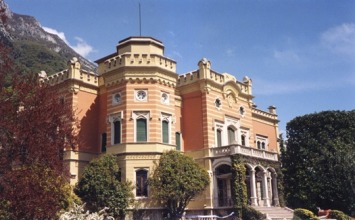 From Mutts to Mussolini, this beautiful waterfront villa has history.

Its history intriguing, Villa Feltrinelli was once the famed quarters of Benito Mussolini.  He stayed at the villa situated on the shore of Lake Garda, Italy towards the end of World War II, as the German government attempted and failed to rebuild fascism.  Now, the Villa serves as one of the most beautiful and luxurious small hotels in the world.  With only 21 rooms, the attentive staff caters to guests’ needs and helps tailor for them the perfect vacation.  In ensuring a guest’s comfort and happiness, pets are also invited to enjoy the offerings of the peaceful retreat with breathtaking views of the mountains and the water.

The hotel’s property includes formal gardens, olive and orange groves and naturally wooded areas, all recently resurrected to their original beauty.  The agricultural groves provide the fresh ingredients for the Villa’s kitchens.

Strolling through the exquisite gardens, one’s eyes and nose are delighted by the blooming lavender, hibiscus, hydrangea, iris and many other blossoms.

Villa Feltrinelli dates back to 1892, when it was built as the Feltrinelli family residence.  The Villa was purchased in 1997 by Robert H. Burns, a distinguished hotelier, and reopened in 2001.  Under Burns’ direction, the top of the line country house retains its eclectic character, with ornately painted ceilings, intricately carved woodwork, an imposing staircase and stained glass windows.

It is a perfect destination for one’s pet, as the grounds at Villa Feltrinelli include parks, and jogging tracks, as well as quiet spots to sit and read in the shade, overlooking the lake.

Although the Villa is truly bellisimo (and one can well imagine a perfect vacation never stepping foot or paw off its properties), the proprietors will also will arrange day excursions for guests with an experienced guide, to explore the lake area, or the towns of Gargnano, Verona, Trento and Mantova. 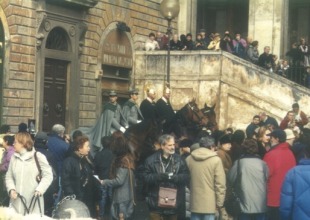 Italian cats are finally having their day!  Recently, the Italian government has determined that the alley cats you see napping at the foot of an emperor’s statue, at the Coliseum, or amongst the ruins in Torre Argentina are part of Roman ‘biocultural heritage’.  Besides, officials stated that many of the tourists come expecting to see these felines, familiar from countless postcards and coffee table books on Italy.   Some think that Julius Caesar’s spirit lives on in these cats that pass their days ruling his temples. To be sure, what was once considered a job for the gattere (an Italian term for cat ladies who looked after and fed the strays) will be replaced by a government-sanctioned effort to provide consistent care and protection for these now-official cultural icons.

All creatures great and small are welcome at Rome’s Sant’ Eusebio church every January 17th for the annual benediction of the animals.  Police come on horseback and families carry their pets to the church so that their furry loved ones may be blessed by a local priest, giving recognition to the animal kingdom for all that it provides the human race.

In Rome, the festival began in the 19th Century when farmers would bring their farm animals before the church.  As the agricultural sect in Rome diminished and the city became more industrialized, the ceremony lost some of its importance.  However, three years ago, the benediction of the animals was brought back for the many local pet owners.  With the help of the City of Rome, local people can once again bring their beloved companions to be recognized by the church.

This custom originally dates back to the Patron Saint of the Animal Kingdom, San Antonio de Abad, who died on January 17th, in year 356.  The festival is held in his honor every year in churches all over the world.