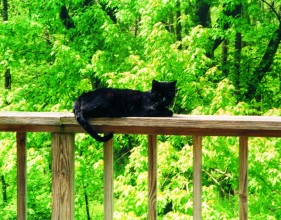 Nestled by the banks of the Housatonic River, in Northwestern Connecticut’s rustic woodlands, The Last Post is considered the “Club Med” of cat retirement homes, “a kind of Hotel Pierre for pampered pussycats,” says it’s Director, Jeanne Toomey.  Almost 400 cats reside on the 37-acre sanctuary, founded in 1982 by

legendary radio star and animal lover Pegeen Fitzgerald.  Many residents are placed there due to their owner’s death, illness or inability to care for them.  Strays are welcomed, too, and at The Last Post, every animal is treated like royalty.

Most residents are available for adoption, while others, due to the wishes of former owners, will live out their lives in the blissful tranquility of the sanctuary.  The non-profit organization subsists on monies bequeathed to the resident felines and on other private donations.  The organization will assist a desiring pet owner in drawing up his or her will properly in order to leave a furry loved one to The Last Post and ensure lifelong care of the pet.  With a reputation renowned for excellent comfort and medical care, four-legged residents have been placed at the sanctuary from as far away as Kuwait.

The cats are housed throughout 5 buildings, where they can lounge on plush couches, fluffy chairs or in baby cribs (some equipped with musical mobiles), and on nice days have two large sundecks from which to choose.  For bedtime and naptime, each cat has his or her own basket and blanket.  Cats may also roam 5 fenced-in acres of the sanctuary.

Not only cats check into this posh pet palace.  The Last Post also plays host to six dogs, three goats, one rabbit and three pot-bellied pigs (one of whom, Hubert, will sit for an apple).  These outdoor residents (minus four dogs who live inside) are secure in heated barns that stave off the cold New England winter.

Since many of the residents left their homes to come live at The Last Post, the staff is particularly sensitive to adjustment issues.  Sheila Ball, the Chief of Staff, explains that, at first, “It is hard for them.”  In the beginning, new residents are placed in cages so the staff may learn their personalities and food preferences.  In this early stage, staff members spend time talking to them, petting them and giving out special treats to help ease the transition.  Noodles, a three-month-old brown tiger foundling was terrified of people.  After months of nurturing by the staff, she is now a social kitty who relishes human affection.  Then there’s Rufus, a Spanish Mastiff with abuse in his past, who enjoys daily car rides to get hamburgers.

Toomey, a former journalist who has lived all around the country, as well as in Mexico, has taken her enthusiasm for life and brought it to The Last Post.  “We generally have a lot of fun here,” she says.  “The whole place is very comfortable.”  No doubt, the residents agree.