The Brooke Hospital for Animals

When Kate Orne, an avid animal lover and photographer came to Animal Fair, proposing that she would document for us her findings on the work animals in Pakistan, we were nervous.  With all that we’ve read about Pakistan of late, of all the poverty and violence, we wondered-what type of stories might she bring back?  We had been looking for someone to report on this part of the world, but at the same time were worried that a sense of hopelessness might prove overpowering.  Could there be any silver lining here? Was there hope for animals in an impoverished land with scarce resources for even its people?

The stories Kate came back with surprised us-not because they were horrible and heart wrenching, but because, quite the opposite, they were exhilarating and heartwarming. She returned to tell us about the respectful and loving relationship between the Pakistani people and their horses, mules and donkeys that they rely upon to perform their daily work.  And about an incredible organization making a very real difference in the lives of a long-suffering people, Brooke Hospital for Animals.

“Most of my friends said I was mad, but they also know what an animal lover I am– and that I am, indeed, a little bit nuts,” said Kate about her decision to fly to Pakistan.

In order to visit the refugee camps near Peshawar, this tall, striking blonde journeyed to a land where many women wear burkas. For Kate, seeing the good work being done there firsthand — especially by Brooke Hospital for Animals (BHA)– was worth any risk. It was even worth the risk of being called ‘crazy’ by her friends back home.

“Besides,” Kate says, “I simply have a soft spot for working animals.”

“It’s a paradise,” says Kate Orne of BHA. Founded in Great Britain during the 1930’s, BHA has spent decades providing free veterinary support and training in animal husbandry for people all over the world.  BHA also builds clinics for long-term care, and is currently helping to distribute low-cost harnesses– devices to prevent the back injuries and infected sores commonly caused by ill-fitting, makeshift yokes and saddles. BHA has projects in Jordan, Egypt and India. Pakistan, though, is the area of most immediate concern for BHA, mostly because of the chaos at its doorstep.

In the developing world, these animals are not just cherished pets or cultural icons. They are also essential for daily survival– often being the only means of both transportation and income for the very poorest of the poor. Sadly, the survival of an entire family often hinges on the health of a single downtrodden horse, donkey, or mule.

In Afghanistan, a decade of drought, the cruel reign of Taliban, and the current international military involvement, have forced hundreds of thousands of Afghanis to flee to camps set up across the Pakistani border.

These refugees bring along their beasts of burden– animals just as devastated by the brutal mountain journey as their human keepers.

In the midst of all this hardship, the people of BHA provide an oasis of mercy. Currently, the veterinary hospital is operating six mobile units and two field clinics to treat the growing number of needy animals gathered at the barren camps on Peshawar’s dusty outskirts. For every animal saved, Kate reminds us, human lives are saved as well, and she speaks glowingly of the brave souls who fight to survive in a war-torn world.

Kate Orne speaks of the BHA programs that teach the art of blacksmithing, new strategies for distributing oral medications, new de-worming incentives– “changing the infrastructure.” That is, introducing new animal care concepts into a culture by building trust and working within established social norms, rather than imposing new ideas from above.

You can find out more about what BHA is doing around the world, and learn how to get involved by visiting the website at:  http://www.brooke-hospital.org.uk 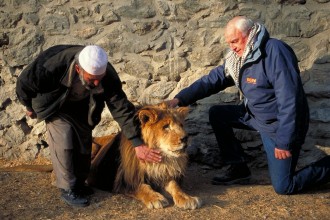 The lion that symbolized survival for the people of Afghanistan

No animal in human history holds more symbolic power than the lion. From Egyptian art on temple walls, to C.S. Lewis’ Aslan, to Simba of Lion King fame, the golden cats have stood throughout time as archetypes of nobility, strength, courage and pride.

Marjan, the one-eyed lion of Kabul, embodied these mythic qualities, but he was no creature of fiction. He lived, breathed, and touched the hearts of millions. A ragged but glorious beast, gentle with friends and ferocious with foes, the lion kept watch over the people of a war-torn land through two decades of chaos.

Marjan, meaning ‘coral’ or ‘precious gem’ in Afghan, was a gift from a German zoo.  When he arrived in Afghanistan in 1978, Kabul was a relatively prosperous city. Even after the Soviet invasion of 1979, the city was left largely undamaged, as the heaviest fighting was in other parts of the country. After 1992, however, when rival mujahedeen groups engaged in a civil war, their battles ravaged large parts of both the city and the zoo itself.

When the Taliban took power in 1996, conditions in the zoo grew rapidly worse. The animals were tormented regularly by Taliban warriors — apparently for sport. Marjan was a favorite target, and members of the Taliban deliberately pelted him with stones.

But the lion had many friends as well.  The poor, oppressed citizens of Kabul adored him. He was especially blessed to have a remarkable zookeeper.  When there was no money for food, Sheraq Omar sought out butchers willing to save scraps to feed him. When Taliban officials, claiming zoos violated Koranic law, threatened to kill all of the animals, Omar approached  an Islamic court and won a ruling to save the creatures’ lives.

This was about the time of the now infamous incident that gave Marjan his sad and noble warrior’s visage.  A Taliban fighter, showing off for his friends, rushed into the beast’s enclosure and started taunting him. The lion struck back, mauling the man who died in a hospital shortly thereafter. The next day, the dead man’s brother sought revenge. He launched a hand grenade into Marjan’s den. A lion’s mane is meant to protect him from attacks by other lions. In this case, Marjan’s mane seemingly saved him.  The lion lost an eye and sustained serious injury to his mouth and jaw, but he survived. Bloodied but unbowed, his victory over the institutional cruelty won him even more affection from the people.

During these years, Afghanistan was growing ever more isolated, and zoo conditions deteriorated further.  The malnourished lion lived in an unheated den without even rudimentary medical care. At times, he survived on little more than love.

And then in a military whirlwind, Kabul was finally liberated from the rule of the Taliban.  At last, Marjan was freed from torment. Zoo associations throughout the world collected hundreds of thousands of dollars to renovate the Kabul Zoo, veterinarians and doctors flooded in to help.  Marjan was given vitamin supplements and served a menu as fine as any lion’s on earth.  The great lion found relief for only a short time, though.  Marjan, precious to the people of Afghanistan, passed away on January 25, 2002.  He was somewhere close to 25 years old; an advanced age for any big cat in captivity.  A courageous soul, Marjan will be missed by a people who have, like him, survived so much.