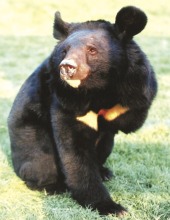 Throughout the forests of Asia, the Asiatic Black Bear roams, unaware of the perils that may await him.  For years, these gentle creatures,affectionately dubbed “Moon Bears” because of their yellow moon-shaped markings on their chests, have suffered at the hands of trappers and bear farmers.  These individuals extract the bears’ bile for use in traditional medicines and commercial products like shampoo, skin cream and soda.  As a result, Jill Robinson, MBE, founder of the Animals Asia Foundation (AAF), initiated the China Bear Rescue campaign.

Thanks to the efforts of Robinson and her dedicated team, an agreement was signed with Chinese authorities to free 500 of these endangered bears from farms in Sichuan Province.  Robinson explains, “… the goal of this agreement is to work towards the future elimination of bear farming in China.”  It also “pledges to promote the herbal alternatives to bear bile.”  In October 2000, rescue of the 500 bears began.  Since then, 65 bears have been successfully released and are flourishing in a temporary rescue center.  But this is not their last stop; construction is starting soon on a cushy bamboo sanctuary, equipped to hold 500 bears, while freeing up room in the temporary center for more bears.

The rescue center is a lively place and the bears revel in its nurturing environment.  Belton Kleberg, a bear named in honor of a colleague, amuses everyone by hurling his bowl across the floor in joyful anticipation of his next meal.  Sausage, a mischievous little bear, enjoys using her paws to grab the buckets and brushes from her caretakers while they clean.  Other bears frolic and play together, rolling around in the soft grasses of their new home.  The bears are cared for by a skilled veterinary staff who, “give so generously of their time and expertise.”

For her tremendous achievement in the China Bear Rescue and her landmark work towards ending bear farming, Jill Robinson was recently honored at the 16th Annual Genesis Awards, presented by The Ark Trust.  Says Robinson, “Sometimes we receive a message in life which is hard to ignore.  For me, that message came in 1993 when I walked onto a bear farm in China for the very first time.  Nothing prepared me for that moment and it was with utter disbelief that I witnessed something that would subsequently change my life and which would start the dream of the China Bear Rescue.”  Jill Robinson and her China Bear Rescue team will make sure that the sun never sets on the Moon Bear.