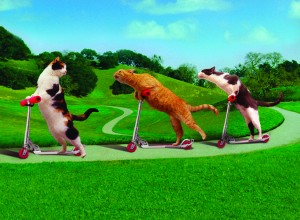 Fanciful, whimsical, surrealistic and silly. John Lund’s art is all that and much more.

Whether it is the sly grin of a mischievous cat or an old dog’s saddest, “Feed me, I’m starving,” look, John Lund’s images speak clearly to us. These digitally created fantasies seem to amplify the ways we think about our pets, almost breaking down the barriers between humans and the animal world.

Which makes sense, because Lund’s work is all about breaking down walls. Thankfully, he doesn’t approach those boundaries with the “shock” mentality so common in the contemporary art world. Lund doesn’t want to assault us with provocative religious or sexual imagery, and he doesn’t want to confuse his audience with abstract conceptual installations. Instead, by putting us in touch with something delightfully “human” about our animals, Lund engages our senses. In that very paradoxical way only animal lovers understand, Lund shows us the humanity of our animals and, in so doing, brings out the greater humanity in ourselves. 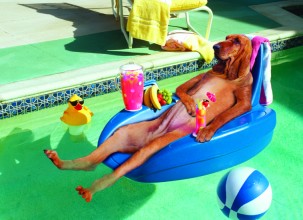 Lund is also well-known for creating “stock imagery,” the super-crisp pictures licensed for use in advertising, on packaging, and in editorial content. His proficiency has won awards and earned high praise from prestigious publications like Professional Photographer, Macworld, Mac Art & Design, and Shutterbug; and his client list includes IBM, Apple and Kodak, folks who know a bit about computers and pictures.

Sadly, successful commercial artists are often frowned upon by so-called art connoisseurs. Likewise, film-and-darkroom photographers sometimes look down on work made with microchips, but our cyber-maestro doesn’t bother with all that. Nor does he fret over the snobbery of painters, curators and photographers who couldn’t tell a bitmap from a jpeg. In fact, Lund has spent the last decade creating what is supposedly the very lowest of lowbrow art: greeting cards. Worse yet, Lund creates cards with puppies and bunnies; exactly the kind of stuff fashionably depressed art snobs love to hate.

But Lund’s wonderful work has garnered both mass acceptance and critical acclaim, proving, as always, that work approached with sincerity, lightness of spirit, and lots of effort cannot fail to move people— whether they see it in the Louvre or at their local card shop.

Is John Lund all sweetness and light? Nope. No one is. Clicking through his portfolio at johnlund.com reveals an artist with a visual vocabulary ranging across a broad spectrum of emotions and influences. The bowler hat in “Blinders” cries out in homage to René Magritte, and the scaffolding in “Transformation” is eerily reminiscent of Pieter Bruegel the Elder’s “Tower of Babel.” One work has a decidedly devilish twist. Clearly though, John Lund can and does express himself in ways that are urgent and even harrowing, but he never lets that darkness define him or his work. The whimsy on these pages proves it.