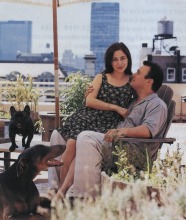 Chefs Michael Otsuka and Diane Forley met in Carmel, California, at the Highlands Inn Masters of Wine celebration in February of 1999.  He was a California native and the executive chef at The Pan Pacific Hotel in San Francisco.  She lived in New York and was the owner and executive chef of Verbena, an intimate 60-seat restaurant located in historic Gramercy Park.  Both had received considerable attention for their culinary accomplishments.

Their relationship started as a cross-country friendship born out of professional admiration for each other’s work.  Via e-mail, they would share their ideas for menus, thoughts on restaurants, travels and details of their day-to-day lives.   By mid-summer of the same year, Michael left San Francisco to move New York to work at Thalia, a restaurant in Manhattan’s Theater District.  By that time, their friendship had blossomed into a full-blown romance.

Michael and Diane were married in January 2001 at Verbena (naturally), and soon after merged their businesses and cooking styles. The two now jointly run Verbena as co-owners and co-executive chefs.  The restaurant is casually elegant and moderately priced with a contemporary American menu blending Mediterranean and Asian flavors.  Verbena has one of the loveliest courtyard gardens in Manhattan, from which the sounds of city seem so far away.  The couple also owns nearby Bar Demi, an intimate, 15-seat wine bar.

These two culinary artists enjoy trying out new ingredients and concepts discovered during their trips to places like Morocco, France, and Italy.

“Being passionate about the same things makes it convenient to plan our free time together,” said Michael. “We share responsibilities and keep each other in check by making sure that we do not work too hard”

Michael and Diane have a shared passion for animals.  Both grew up with many pets, from dogs and cats to turtles, fish and guinea pigs.   Now they share their midtown home with Vicki, a three and a half-year-old French Bulldog, and Ceezer, a five-year-old Blue Doberman.  Diane adopted Vicki from a breeder in Tennessee and Ceezer from a couple in Toronto.

“Vicki is the boss of the two,” said Diane. “Every night, like a ritual, Vicki stands on the bed, barring Ceezer from jumping up to join us. She runs from side to side, and Ceezer seems to actually be afraid of her. But, then he gathers the courage to jump on the bed and he manages to swing the blankets so that he is entirely covered.”

Vicki and Ceezer visit Verbena occasionally after the restaurant is closed and they can have the run of the private garden. They also enjoy eating leftovers from the restaurant’s kitchen.   According to Diane, Vicki is partial to spicy foods and Ceezer to fresh fruit.

Pet-friendly to the extent that New York State health laws allow, Verbena customers can dine with their pets at the three small café tables in front of the restaurant. There is even a special doggie menu featuring grilled chicken or salmon with seasonal vegetables, crispy lamb spring rolls and sliced hangar steak.