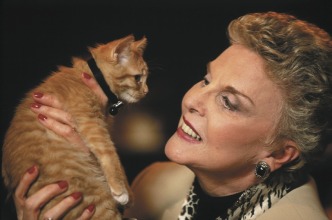 First there was Dionne Warwick and her Psychic Friends network. Then Miss Cleo and John Edwards. Now Animal Planet brings us Sonya Fitzpatrick, a psychic of a different kind.

Sonya’s area of expertise is unique, specializing in the four-legged kingdom.  Deemed the “Pet Psychic,” the English-born clairvoyant is able to communicate with animalkind, contending that throughout her life “talking to animals is as natural as breathing.”  With her help pet owners are at last able to find out what makes their furry friends tick, and what their likes and dislikes are.  Sonya can even ‘channel’ deceased pets, allowing families to communicate with animals that have passed on.

It all began with Sonya’s childhood terrier, Judy.  Sonya remembers a special connection with the dog.  She could feel the aches and pains of Judy’s aging body, and found that she could heal that pain by concentrating and placing her hands on the terrier.

The real-life Dr. Dolittle always seemed to be surrounded by animals as a child.  Because she was one of the few able to communicate with them, the dogs, cats, and even geese were eager to spread local gossip with her — they had never had the human perspective in their rumor mill.  But Sonya gave up communicating with the local animals after a traumatic experience.  One year her father served cooked goose for Christmas dinner — the same goose that she had befriended!  Too painful for Sonya, she refocused her energy and concentrated on her burgeoning fashion and modeling careers.

But old habits die hard, and in 1994, Sonya began communicating again with pets, and built a clientele of people who wished to know their pets better.  She has even assisted in the search and rescue of lost, sick or injured pets, and is a vocal advocate of no-kill shelters and animal sanctuaries.  Now living in Texas, Sonya communicates regularly with her own dogs Daisy, Foxy, Honey, Elle, Samantha and Sammy and her cat, Abbie.

Using Sonya’s psychic techniques, we can start asking our pets “Do I look fat?” and “Does this look OK”, and all those other questions no one else wants to answer.  Just remember-pets don’t lie.

Seven Simple Steps to Communicating with Your Pet:

Say your animal’s name telepathically to get his attention.

Visualize your animal as you say his name.

Send a picture of his physical body. Direct this to him, along with his name.

Ask if there is anything your pet would like you to do for him. Imagine your animal is sending an answer back to you and accept whatever you receive in your imagination.

Always acknowledge the answer, whatever you receive in your imagination.

Continue to ask him other questions, and remember to trust your imagination for what you are receiving back from your animal.