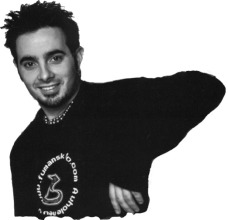 An athletic pup, he could “run for days,” had a perfect build – a tight waist and brawny shoulders.  He loved to chew on sunglasses and spectacles, had ripped into many a stuffed animal, and absolutely adored Snausages.  The pug was only 3 1/2 years old, when he passed away in April. Busta was the beloved road dog of N’Sync heartthrob Chris Kirkpatrick.  Originally from a breeder in LA, the pug’s passing struck a devastating blow to Chris who was Busta’s biggest fan.  Chris lit up when he talked about the pug, named after his hip hop idol, Busta Rhymes.  He told about his dog’s love of traveling with him and the band.  Chris mused, “everyone on the road with us loved him too…He was the best road dog.”

Busta was always up to tricks, and on one NSYNC tour while en route to the elevator he took an unscheduled pit stop in a room being cleaned by a maid.  “She was up on the bed screaming, as if she had seen a mouse,” said Kirkpatrick laughing.  “Busta was just barking, but looking at me as if to say–what’s wrong with her?”

Kirkpatrick had adopted a second pug to ease the stress of the older dog’s life on the road, and left the two dogs (Korea and Busta) in the care of his family.  At home, Korea would just follow Busta around the house and do whatever the older dog would do, like any little sibling would.  Korea, named after Mighty Ducks’ hockey player Paul Kariya (but spelled like the country), soon outweighed Busta and purportedly fits into fashions from Chris’ teen clothing line Fuman Skeeto. 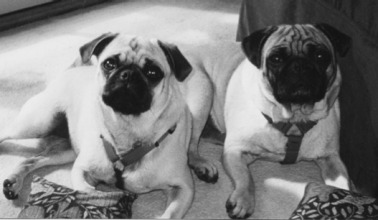 Busta missed the road, though, says Kirkpatrick, although unlike his ‘father’, Busta didn’t like music that much, (outside of one particular hip hop song that mentioned him by name.)  When he heard the song [Chris sings a bar of the Busta Rhymes tune], he would run around the room, looking for whoever was calling him.   Busta would not pay attention to the NSYNC tunes played on MTV, perking up only when he caught Nickelodeon’s “The Fairy Odd Parents” in which Chris provides the voice for pop singer Chip Skylark on the series.

Chris had been in the midst of building a new home with a custom-designed backyard where the two dogs would “have a lot of places to play, and could just go in and out the doggie door”.

Chris loved having Busta and Korea as companions, saying “its so nice to come back home” to them, and that they were “perfect listening companions.” Says Kirkpatrick, “I’d come home and be bummed out, and would just chill with the dogs.”  This would lighten any day, any trouble he had.  Busta is certainly greatly missed by Chris and by all of the guys in the band, those affiliated with the band, and by Chris’ friends and family.  Busta was a dog like no other.  While Chris is on the road and life is so hectic, his sister is caring for Korea.  But his continued love and sense of loss for the dogs is evident.  When asked what he would be if he wasn’t a rock star or clothing designer, Chris quickly answers,  “I would be a pug.”

Since Busta’s passing Chris has been keeping himself busy with his clothing line, Fuman Skeeto; check it out at www.fumanskeeto.com.