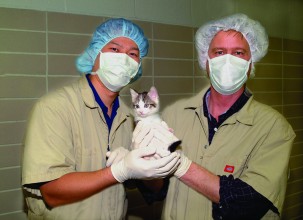 WITH WHAT’S HAPPENING IN SCIENCE THESE DAYS, CATS MAY GET MORE THAN 9 LIVES

CC, cloned in a jar by scientists at Texas A&M University, College of Veterinary Medicine, is the first literal (but not “litter-al”) copycat, and the press is already pointing out the differences between her and her genetic match with a fervor usually saved for British royals. This is a controversial cat – even more so than the ‘copycat’ cheater in class. CC brings up issues of creation and nature and the limits of the power of man. The purring ball of fluff is sure to distract you from the issue at hand, as she is so adorable. With this result, how can cloning be wrong?

A part of me thinks of my own ginger-colored cat. This gives me hope. I might never have to part with him. In the race against the inevitable, my kitty was just handed a “wildcard.” With Cutes McGee (my cat) and a mad scientist-type with a test tube and a dream, I might be able to hold on forever to the mother-cat relationship that I have cultivated ever so carefully over the last eight years. By the time that I’m past my prime, perhaps I will be able to do the same for myself and we will keep repeating and repeating and repeating….

But will my cloned cat and I have the same relationship that our originals have at present? Will we look the same? Act the same?

Unfortunately, it appears inevitable that the cloning of loved ones can only end in disappointment. Cloning in this instance leads to hopes of recapturing the essence of a being, as well as its physicality – a fountain of youth, a bearer of second chances. But with CC scientists immediately saw differences, and determined that she was a ‘clone’ but not an exact copy of her genetic source.

In addition, is it right to bring into this world a being for whom you already have so many expectations? That you think of as old hat (or old cat)? It is a recipe many times tried and failed, love on the rebound, second best.

Copycats are what mass-marketers thrive upon, catering to the human frailty whereby we always want what someone else already has. Hoping to produce a Bernard Arnault fashion cat, with intertwining LVs patterning its fur. The trendy cat. The couch potato cat, a favorite among sports fans. The commercialization of cats.

Pitchmen will call us during dinnertime, asking if we are satisfied with our present cats.  Would we rather have one that ‘eats less’ (is more economical) and ‘uses the litterbox only once a week’ (is much more efficient)?  And, before you can answer, they might ask, “what would you pay for such a cat?  Might you say $99.95?  $69.95?  “No,” they’d tell us, “right now, the Easy-cat can be yours for only 2 installments of $19.95! And if you order within the next 5 minutes, you can get a free can-opener keychain and ionic pet brush-a $50.00 value!”

All of this to say that there is an irony in the fact that scientists chose the cat as the first pet-subject for cloning.  Cats are notorious for not caring what people want or say-are highly individual with strong independent personalities.  The dog will fetch, the cat will not.  The bird will mimic, the cat will not.  The beauty of the cat is that it doesn’t listen, loving and being loved on its own terms.  Cloning, its very essence, is contradictory to cats.