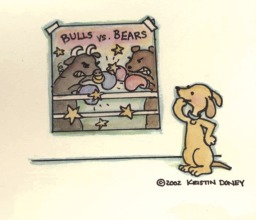 At the southern tip of Manhattan, only a stone’s throw away from Wall Street’s intersection with Broadway, stands a ferocious bronze bull ready to charge.  A symbol of American Financial Might, this statue played a central role in millions of photographs throughout the 90s – either alone and confident for countless corporate annual reports, or with tourists straddling his neck ecstatic to be riding the bull market wave that made more paper millionaires in five years than had ever existed.  I’ll admit, I resented those friends of mine who bragged of their new-found wealth and “sure-thing” stock picks while I sat on the sidelines afraid to get burned; it all sounded too good to be true.  Now, in 2002, we all know it was.  I never expected my 401k to become a 301k in so short a time (the ride back always seems shorter).

So, with no meaningful investments left to follow, I paid that old bronze bull a visit last month, only to find him dreadfully alone. Anyone in the know would tell you that the bull market had passed and the bears are out of hibernation.

While there exists no universally accepted theory explaining the origin of these animate market descriptors, the most popular one revolves around the way these mammals attack their prey.  In the wild, bears traditionally swat their massive claws down, pinning and disorienting their adversaries.  Bulls, on the other hand, charge their rivals, heads low, only to scoop them up into the air with their forceful horns.

Their pin-striped counterparts – whether in New York, Chicago, London or Tokyo, all exhibit similar (though usually less violent) mannerisms.  Wall Street bears may believe, for example, a given stock is overvalued and will sell it with the intention of buying it later at a lower price; they want to push prices down.  (Unlike the real world, it is perfectly acceptable in financial markets to sell something you don’t yet own).  Bears’ opposites, the bulls, would see a stock as undervalued and buy first; they are happiest watching prices soar.

The economic connotations of these words can be traced back to the mid 17th century, but may be on the verge of becoming merely an historic footnote.  In the wake of countless corporate scandals that rocked American equities, it may be time to choose new animal mascots to represent financial market trends.  The kangaroo comes to mind – with its wild up and down movements, and deceptively violent streak.  Or the other extreme – the penguin, a gentle enough bird, but ultimately flightless.