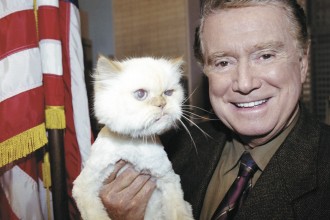 The Million Dollar Question …Who is the most handsome cat on the planet?

And, Yes, That’s His Final Answer

Known for his incessant banter every morning on Live with Regis and Kelly and his ever-familiar catch-phrase “is that your final answer?” from the hit game show, Who Wants to be a Millionaire, Regis Philbin never seems to be at a loss for words.  He’ll poke fun at his co-host Kelly, feigning boredom with her talk of the trials of pregnancy, interview celebrities on the latest movies and projects with humor, and prod nervous game show contestants.

But that self-assured celebrity persona falls to the wayside when he is at home with his cat, an 18-year-old flame point Himalayan named Ashley.  Ashley and Scarlett, a tortoise point Himalayan who passed away last year, originally belonged to the Philbins’ daughter JJ.  When she moved to Los Angeles for a job, she asked her parents to “temporarily” take care of the feline duo until she got settled.  “Needless to say,” says Joy, “Regis fell in love with the cats.”

“The thing is this,” Regis explains, “JJ went away the last two years of high school, and then to Notre Dame for her college years.  Then she returned and took Ashley and Scarlett back with her.  They had 4 or 5 years together but then she had to move to the Coast and we got Ashley back, so he’s been with us off and on for most of his life.”

While both Regis and Joy share in the care and feeding, Ashley is a bit fussy about his dinnerware.  “He likes his dish completely cleaned and Regis doesn’t do that all the time,” says Joy.  “I wash it out,” counters Regis, “and I put a lot of hot water in it, but I don’t really get it as clean as Joy does, I guess.”

Ashley is an integral part of the Philbin household, both in their New York apartment and weekend retreat.  “Every weekend,” says Regis, “we drive up to Connecticut and we usually take him with us.  He is a handful in the car though.  He sheds terribly, and can’t get used to riding.  He wants to sit in Joy’s lap and have her arms around him for the first 40 minutes of the trip, so the drive is kind of tough.  But when we don’t take him, I miss him terribly.”

Joy adds, “Sometimes I think Regis misses Ashley more than he misses me.  On our last vacation, I don’t think a day went by that he didn’t tell me how much he missed Ashley.”  “I did miss him,” Regis says, “but I said that jokingly, Joy.  I thought it would aggravate you if I kept telling you that.”

Due to his elder kitty status Ashley has slowed down a bit, and is now blind in one eye, but is doing well despite his advanced age.  Age is just a number after all and Ashley is living a happy, carefree and pampered life in the Philbin household.  He even finds time in his busy schedule to make guest appearances on Live With Regis and Kelly.  Who says dogs have all the fun?

Live with Regis and Ashley: Notes from the Photoshoot

One of Ashley’s guest appearances on Live with Regis and Kelly was precipitated by the stunning cat’s selection as Animal Fair’s winter cover model.  As Live was just ending (an episode where Regis made a small on-air snafu, referring to Animal Fair as “Cat Fair”), the team waited while the energetic crowd snapped their own photos of Regis, Kelly, and the set, and finally filed out.

While Regis went backstage to retrieve Ashley, the Animal Fair team prepared for the photo shoot.  The host’s assistant had warned us that morning of a grooming mistake that had been made, and that Regis was very upset and worried that Ashley wasn’t looking as handsome as usual. Regis made his grand re-appearance with the cat, and it was clear, there was some sort of mix-up and the poor cat had been shaved.  He still had the fluffy head of a Himalayan, but the rest of his body sported a marine’s short crew cut.  This debonair protagonist was still sprightly at 18 years old, but also had some of the outward signs of age – a bit of a snaggletooth and one blind eye.  These distinguishing marks only made us fall harder for the cat that Regis held so protectively.

At home in his Live seat, Regis held Ashley up to face him, looked the cat in the eye and fondly said, “You’re indestructible, right Ashley?”  Then he turned to us, affirming, “He’s a beautiful boy, he really is.”

Quiet, polite and calm, Ashley held his southern gentlemanly demeanor throughout the shoot.  As the flash clicked away, Regis spoke of Ashley’s low ash diet, his plentiful Fancy Feast and rice and turkey favorites, and added that he spends as much quality time as he can with the cat, giving Ashley backrubs and scratching around his ears.  His kitty massages, Regis bragged, “put Ashley in heaven.”

After so many posed shots, we brought out a catnip toy to entice Ashley to play.  The particular toy was a square bag with a long elastic and a loop on the top, to easily fit through one’s finger.  It had tiny fluorescent feathers on the bag and proclaimed “I Love Cats” in bold letters across the front.  It was intended to bob and sway in front of the kitty, eliciting hours of fun.  Instead though, it was Regis who pounced on the toy.  “This is what Animal Fair brings?  This is the lamest toy I’ve ever seen,” he joked.  For Ashley, quite seasoned in the toy department, the “I Love Cats” catnip toy was not a head-turner.

Regis gently picked the cat up to share his Live chair with him.  “What is the secret to such a long life?” we asked him as Ashley purred away on his lap.  Not missing a beat Regis answered back emphatically, “I’m the secret.”