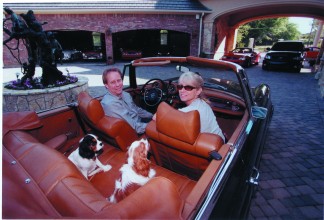 IT’S POSSIBLE THAT EVEN KING CHARLES II’S CAVALIER KING CHARLES SPANIELS WEREN’T TREATED AS ROYALLY AS THOSE OF RON AND KATHI STURGEON. THE COUPLE’S PALATIAL 10,000-SQUARE-FOOT FRENCH CHATEAU APPEARS TO HAVE BEEN BUILT FOR A KING, BUT REALLY, IT WAS BUILT FOR A DOG.

Before Ron’s auto-focused career began to flourish, he and Kathi, his wife of over 23 years, lived in a single-wide mobile home. After his business boomed, the couple decided to build an over-the-top home that paid homage to their precious poodle, Mr. Clouseau. Sadly, the 15-year-old dog passed away before the house was completed, but their loyal friend remains with them in spirit. His ashes are kept in a blond-colored urn fashioned by Kathi’s late father, John Haddock, who took the wood from an elm tree he found on their property before the foundation for the house was laid.

It’s all about dogs in this house. The Sturgeon’s home boasts over fifty 18th and 19th century dog focused paintings and pieces, has dogs supporting the mantel of the master bedroom’s stone fireplace, and Black Forest Wood carvings of dogs adorning the library’s three piece clock set.

And then there are the real dogs. Ron and Kathi opened their hearts, and their custom-built hotel style doggie door, to 2 adopted Cavalier King Charles Spaniels, Madison and McKenzie. The dogs pass from the yard to the house through their personal door and into their own luxurious ceramic-tiled room. Their room has custom plumbing and water faucets so they can keep clean, and naturally a cable TV turned to Animal Planet so boredom (if possible in such a house) is never an issue. When the great outdoors entices the stately Spaniels, they can wander in and out at their leisure through the doggie back door.

Of their accretions, Ron explains, “Yes, I’m proud of our success and what we’ve collected, but all of it makes sense only if we share it with others.” Ron and Kathi, through years of hard work and patience were not only able to build a dream house to showcase their passion for the canine set, but also rescue two loving companions, with whom they share their good fortune and their lives.