Giving Us Her Verdict on Pet Owner’s Responsibilities

Law and animals are the two most important things to Catherine Crier, host of Court TV’s Crier Live and first-time author of “The Case Against Lawyers” due out October 8th from Broadway Books.  She has shamelessly used her talk shows at CNN, Fox News and Court TV to highlight animals and their needs in the modern world.  “Bubbles the bright yellow Burmese Python was gorgeous … of course the big cats may be my favorites.”  Why animals on Court TV?  “I don’t need legal excuses to bring them on, but their rights and our liability are always good excuses.”

Catherine Crier grew up with her ‘critters’ and her books.  Horses, cats, dogs, goats, chickens, birds and turtles, you name it — she loved them.  From early childhood, animals were her best friends and confidants.  Moving to New York City when she joined ABC’s 20/20 was a huge change in lifestyle for Catherine.  “I couldn’t bring my Great Dane to a New York apartment!”  While he stayed in Texas on the family farm, Catherine was desperate for a four-legged companion.  Finally, while she was in Paris she found a Yorkshire terrier who immediately stole her heart.  She named her “Je t’aime,” Temmi for short.  “She was 6 weeks old, fit in the palm of my hand and traveled for two weeks in the bottom of my purse.”  Now, while Catherine is hosting programs, writing books and speaking out as an advocate for the people, Temmi, all of five pounds, rules the canine (but not equine) part of the family: Bella (German Leonberger), Digger & Boomer (Italian-Yugoslavian Mountain Dogs) and their offspring, Dixie Chick & Cisco (affectionately known as Euro-trash).  Dixie Chick & Cisco are two of ten puppies that Catherine helped Bella deliver over the course of 7 hours.  It was not clear who the father was, so Catherine proposed a “sheep dog trial” complete with DNA analysis of the brothers, Boomer and Digger, to discover paternity! 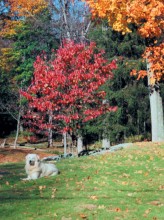 Catherine’s love of animals goes far beyond her own ‘kids’.  She is involved in the larger animal community as well.  “I am a regular contributor to many wildlife organizations and have had a number of meetings at the Bronx Zoo about their conservation programs around the world.”  She has been lucky enough to have mountain lions, elk and moose at her Wyoming cabin, has helped deliver many a foal (including her now 23 year old stallion Bo) and spends vacations studying flora and fauna on the plains of Africa.

While pragmatic about our intellectual evolution, Crier hopes that people will recognize the invaluable role all animals play in the well being of the human species and the planet as a whole.  She follows the slow development of animal rights in our courts of law.  Certainly we should be held responsible for the behavior of any creatures we keep, but we must also be accountable for those precious lives we hold in our care.  She will tell anyone who will listen of our duty to protect the natural world.  If we fail, we lose more than wild creatures and companions – we lose the better part of our own humanity.