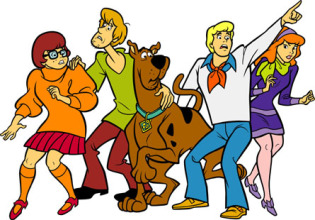 The theme song says it all. Scooby Doo was cowardly and lovable with an appetite like no other. To face danger, Scooby would have ti be enticed by Scooby Snacks (which continues to raise eyebrows at the DEA). Zoinks!

Post-snack, he’d woof down submarine sandwiches, pizza – whatever he could find – which his beatnik best friend, Shaggy, in lieu of going after the ghosts with the others. You know the drill, they’d split up; Fred and Daphne went off together (Jeepers! Another hot topic for Scooby fans), Velma, ever-frumpy in her orange turtleneck and coke-bottle specs (which she would, of course, lose at the most inopportune moment) would be fast on the trail, only to be mistakenly whisked into a secret room via revolving bookcase, unable to find her way out. I guess when she was “glasses-less,” her vision was just that poor.

Munching away, Scooby would leap in fear into Shaggy’s arms at the first sign of the ghost in his quadrant if the haunted castle. So the chase would begin, Scooby and Shaggy would teeter on the brink of being caught by the paranormal presence, but in the nick of time, to dupe the villain di jour, the two would cleverly hide in clay post, jump into the coffin of an Egyptian mummy, or strike the pose of a hieroglyphic.

Scooby is credited with coining such phrases as “Ruh Ro”, “Relp!”, not to mention his sing-song “Rooby Rooby roo!”, all of which infiltrated into mainstream vocabulary. He wasn’t much for pronunciation, but what can you exepect of a Great Dane, right?

Scooby had many a relative that joined the cast at one time or another – the two most notable being Scooby Dum, gray and buck-toothed, and Scrappy Dog, universally despised for his Napoleonic complex and proclivity to escalate any situation into confrontation.

Why do we love Scooby so much? Even a “scaredy-cat,” (oops I mean dog!) can save the day. With all of his faults, Scooby would land on all fours, unmask the bad guy, and allow the whole “mystery machine” crew to survive intact.

So Scooby Dooby Doo, where are you now? You can find him this summer on the big screen, by the side of Sarah Michelle Gellar. He’s more confident in the new flick (wouldn’t you be with a vampire Slayer in your corner), and helps the others to battle a slew of zombies. The film also stars Freddie Prinze Jr., Matthew Lilliard and Linda Cardellini. Like Wow!