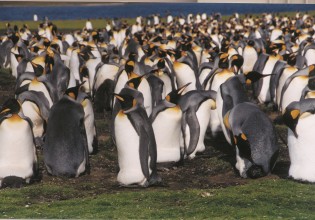 Forget the zoo. All right, it’s a lot cheaper and easier to get to than Antarctica and the Falkland Islands, but you’re never going to see countless penguins, seals, albatross or whales surrounded by icebergs—even at the Polar Bear Plunge in San Diego.

Wintertime in America is summertime at the bottom of the planet, and that’s pretty much the only time the Antarctica region is easily accessible by cruise ship— the way virtually all intrepid tourists make it to the hardest-to-reach of continents.  The long, long journey for an Antarctic safari, though, is well worth the effort.

At Volunteer Point in the Falklands, a crowd of Magellanic penguins – easily recognizable by the white stripe circling their heads and chests – outnumbered humans.  As a cold rain fell, nine of them raced into the water, a dozen waddled single file away from the surf and others milled about, squawking for mates or chicks (penguins rely more on sound than sight to find their loved ones).  But the real crowd was a mile or so down the beach and over a bluff.

There, we hit pay dirt: several hundred King penguins, the second largest breed on the planet “some grow up to 3-feet tall!”.  As if dressed for the royal ball, their shiny black backs and sleek white fronts were complemented by a hint of orange at the neck.  Their heads and beaks had patches of black and orange.  Suddenly, like a Broadway production that called for better lighting, the sun emerged.  The moment seemed extraordinary not only for the wide-eyed humans, but for the several penguins who inched forward to get a better glimpse of the tourists.  Our visit even had a grand finale: groups of Magellanics and Kings pausing on the shimmering white sand for these postcard-perfect moments.

At turns, regal penguins are also capable of slapstick comedy.  At a teeming rookery of Gentoos – small, orange-beaked, black-and-white penguins – on Antarctica’s Cuverville Island, several adults were returning from the iceberg-cluttered water, their stomachs visibly bulging with food, some of which they’d regurgitate for their chicks.  Turning their beaks to the sky, they loudly cawed. But feeding time had clearly taken too long for some hungry youngsters, and they descended on the adults, even those that didn’t respond parentally.  Several moments  of pleading, prodding, pecking and squawking was all the pestering the adults could take.  They waddled off – and a Keystone Kop chase was on.  Up the rocks, around a boulder, down to the frigid water, back again; the chicks refused to give up their hot pursuit.  As minutes went by, others joined the chase.  When one adult stopped abruptly, several chicks were so close behind they all toppled over in a big pileup – then got up and resumed the chase. I laughed so hard I wondered if I’d frightened them.

The dangerous, rocky cliffs high above the ocean in the Falklands seem an unlikely home for any animal that doesn’t have wings -at least ones that can be used to fly.  Yet that’s where I spotted my first penguin, a breed called a Rockhopper, as it waddled off into the brush toward the windy, exposed cliffs above the pounding surf.  It was small, had big feet and yellow-tasseled eyebrows.  It had a solid black back and wings, and its plump, furry white chest was covered in dirt. It looked tired.  It looked like it needed a hug. But the repeated, stern warnings we’d been given about the dangers of actual contact with the animals (more for them than us) prevailed over my paternal instinct.  Besides, many of them smelled.  After a few minutes, groups of Rockhoppers were everywhere.  Like packs of self-absorbed teens headed down the street, the flightless birds rushed about.

Clearly, Chinstrap penguins are influenced by the longtime fashion choice of the fashion conscious— simple solid black back and solid white front, complemented by a black line stretching across their white face – a chinstrap.  One dreary Antarctic morning, we visited a colony of Chinstraps at Hannah Point on Livingstone Island.  The horrendous weather – strong winds, a driving rain that made the rocky shore ultra-slippery – made me think I’d found the most inhabitable place on earth.  The penguins seemed to barely notice. Some searched for food, others kept close watch on their chicks and one began to build a home by creating piles of small rocks it gathered one by one in its beak.  One poor penguin badly needed an umbrella: his fur was thoroughly drenched and dirty.  But a plump one nearby stood out with a fashionable herringbone look – its feathers were molting – and its chinstrap looked like a contented smile across its face.