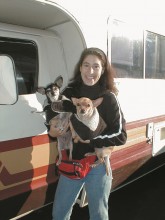 When I first decided to rescue a dog from a shelter, I hadn’t owned a dog before, unless you counted Wyskers, the miniature schnauzer, who was, by default, my mother’s dog because my sister and I failed to consistently take care of him. Because my only exposure to canine companionship was a terrier breed, I arrived at a no-kill shelter the day after my birthday, in 1996, determined to find a terrier puppy with my name written all over it.

Ever notice how shelters hide the puppies in the back room and force you to walk the long walk past cages of larger dogs and the older ones? I almost missed the wafer-thin, trembling chihuahua at one end, but when I stooped down to peer between the metal bars and see what he was, he lifted his paw, ready to shake my hand. Done. You’re mine. Let’s go home.

As with most shelters, they had no history of his previous life, only that he had arrived that afternoon from another shelter in the city.  They had put the name PeeWee on his cage, but I chose to call him Chewbacca, a big name for a very small dog with gimpy, arthritic legs. Chewie for short. He rode back with me into the city,  on a train, huddled in the corner of the big cardboard box on

We spent the next weeks sizing each other up and down, trying to make sense of our relationship. I wasn’t quite sure how a dog owner should behave.  That is when I decided to create a life story for him to help me understand why he did the things he did. I needed a reference point to explain his behavior and to guide me in figuring out how I should treat him or, better yet, relate to him.

Eventually, I felt that I had a basis to create a story of Chewie’s life before me, the events in his past that shaped who he

This is his story. A Dog’s Life Story

Chewie lived with an older woman, infirm, who couldn’t really play with him because of weak muscles, frail bones. She kept him on her lap most of the day, when she could sit up. Otherwise, he curled by her shoulder as she lay in bed, sighing deeply as he listened to her breathe.

He was an indoor dog, never having been taken outside, sharing the household with several cats. He knew they weren’t exactly like him but was never quite sure what they were. They were just

The woman, his owner, had a son. He had a dark complexion, a heavy accent, and an angry manner. He kicked the cats, yell at the woman, then kick Chewie as the little dog barked and growled in the

Mostly, Chewie’s life was a quiet one, content to keep the old woman warm, to offer her some comfort.  When she died, he knew she was gone but didn’t know what that meant for him.  The next thing he knew, the mean man put him in a cage with the cats and brought them to a shelter where he was transferred to a larger cage, surrounded by big dogs and endless barking.  He hunkered back into the darkness of his cage.

The next evening, he heard footsteps. A figure bent down on one knee, eyes peering inside.  He walked stiffly over to the front of the cage and raised his paw. The creak of the cage door opened, and a gentle pair of hands reached in to get him. The last thing he remembered, before falling asleep, was being in someone’s arms, tucked warmly inside a coat.

The next thing he heard was the light laughter of a woman. “Chewbacca!” she exclaimed, but he didn’t know what it meant. Her arms, wrapped around his tiny body. Comfort and home.

He tried to figure her out, understand who she was and what had happened in her life before him. He watched her closely, the way she sat for hours, staring at a glowing box, fingers clicking.  He’d

Several times during the day, she’d bring him outside, just around the block or sometimes to the park.  When he’d bark at bad men, she would tell him how brave he was but that he didn’t need to worry so much. She said she’d let him know if there was danger.

She cooked delicious meals for him, and give him a taste of everything she ate, right off her plate.  In bed, she let him curl up under her arm or in the crook between her neck and shoulder.  So familiar.  He’d sigh deeply as he listened to her breathe.  Life was good.

Aliza Sherman is currently working on her 4th book, about her solo RV travels across the country with Chewie and his adopted brother Ernie. Her new book, “PowerTools for Women in Business” (Entrepreneur) is in bookstores now.

To find a framework for Chewie’s history, I observed him closely, watching for clues to his life before me by analyzing the way he reacted to everything around him. Here are some of the distinct behaviors I noted during our first weeks together.

Behavior 1:  Following old ladies. Tugging at his leash and making a beeline for any old lady who passed us on the street.

Behavior 2:  Lack of play behavior. Clueless with a chew toy or ball. Didn’t fetch. Didn’t run around. Didn’t seem to know how.

Behavior 3:  Ignorant to peeing tactics. Never lifted his leg on fire hydrants or lampposts. Squatted over pieces of paper or plastic trash on the sidewalks.

Behavior 5:  Unimpressed with cats. Not a bark, not a growl. Just a look as if to say “Oh, you’re a cat” followed by extreme disinterest.

Behavior 6:  Cat-like. He daintily licked his paw to primp and clean himself with the meticulousness of a cat.

Behavior 7:  Hated dark-complected men with accents. Went ballistic when he saw or heard them.