The heartbreaking pictures of rescue dogs working the World Trade  Center disaster hearken back to photos taken during another difficult time in  American History: World War II. Many older Americans may see these current photos and be reminded of past pictures; poignant images of soldiers and their dogs.

Author L. Douglas Keeney had already published four books on World War  II, and was researching a volume on Guadalcanal when he found a spate of  “boy and their dog” shots. Intrigued, Mr. Keeney spent three years combing  through files from the Army, Air Force, Navy, Coast Guard and Marines to build a collection he recently published in “Buddies: Men. Dogs. and World War II.” (MBI  Publishing Company, $24.95).

“There’s two ways to look at it,” says Mr. Keeney of the parallels with  what is happening today. “Those (rescuers)  are working dogs, and yet there’s also the dog that comforts you. It’s clear even as far back as World War II dogs comforted our soldiers. I feel even as working dogs, dogs  make the firemen and policemen feel better, just as they did in World War  II.” 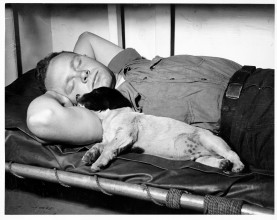 The art of the “buddy photograph” began when war correspondents were  searching for images to send to the local newspapers back home. As the war wore on, buddy photography began to play a large part of the lifestyle shots shown by American magazines, a way to humanize the still boyish soldiers of the war and reinforce the innocent image of a boy and man’s best  friend.

Says Mr. Keeney, “The purpose the photos served is they amused the home front and reassured them that the boys were still boys. When they’re surrounded by such horrific war, we can see these kids relax again.

It’s also timely because there’s a resurgence of interest in World War II.  We’re all still watching ‘Band of Brothers’ on HBO and last summer there was  (the film) ‘Pearl Harbor.’ It’s a popular topic. These were magnificent men and this is a lens that lets us see them when they were just young guys like they were before the war.” 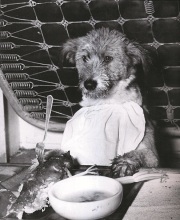 “Buddies” features a few combat shots (such as a watchful Doberman standing over his sleeping soldier in a fox hole) but most photos in the collection are more in the vein of “Our Gang” humor — just witness the bombardier who has drawn on a Petey-like eye patch to match his dog. Puppies — most of them picked up in campaigns throughout Europe and Asia — perch in ammo boxes, help with mending canvas or just pose wearing  small sailor coats to match their owners. Fiercer, older dogs “fight” the enemy with barks and growls, and a menagerie of alternative pets (monkeys, crows, even a snake!) keep the soldiers of the South Pacific company.

Each division of the armed forces had a different slant on how they approached buddy photography, according to Mr. Keeney. “The coast guard were in the Pacific Theater so they adopted almost anything that was moving,” he says. “The Air Force guys were pranksters, they’re all kids. The photos are keeping with the character of all the different branches.”

But regardless of how they were portrayed, or even what kind of pets the men returned from battle to, each animal had the same effect — to calm and reassure a world-weary soldier.

“The minute the battles were over and the men would return to their posts, they would engage the animals. It transported them and let them escape the reality of war. It’s so clear in some of their eyes. There’s one photo of a  soldier with a dog tucked in his shirt. He clings to that dog as if it’s his only link to humanity. War is awful, and these dogs were the respite.” 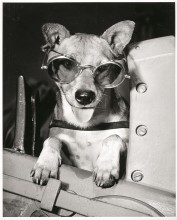 Mr. Keeney sees this photography as the precursor to modern dog photographers such as William Wegman — although, curiously, buddy photography was never as popular as it was in World War II, virtually vanishing during the Korean War and Vietnam.

Whether the dogs doing their valiant work in today’s war become historical footnotes remains to be seen, but the purpose our pets serve is the same throughout the ages.

“At the moment, we’re all looking inward and dogs are part of the  family,” says Mr. Keeney. “They’re always there, they know when you’re sad. They’re part of the heartbeat of your life, the circle of love.”