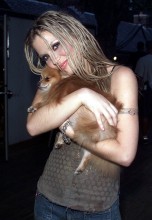 It was a difficult day when pop sensation Willa Ford and Backstreet Boy, Nick Carter had to tell their dog Houston that they had a problem.  They were breaking up.  And they had not only Houston, their oldest pug, to worry about, but also puppies Squirt, Foxy, Mikey, Willy and Rocky, not to mention their macaw named Marino.  Now with custody of three of the dogs, Houston, Squirt, a white miniature Maltese and Foxy, a teacup Pomeranian, Willa (a.k.a. Amanda Williford) advises, ‘If you do break up, be real and honest about who can be more fair to the dog. . . And remain friends. . . Its like having children.’

Recently, Willa has added Star, a Boston terrier, to her canine family.  Barely a year old, he is already a ‘road dog’ and backstage Very Important Puppy.  ‘What’s great about dogs’, Willa says, ‘is that they don’t know or care whether you are a superstar,’ finding unconditional love a rare commodity in the fickle music business.

When it comes to animals, this ‘Wanna be bad’ girl is anything but bad, and you always know if Willa Was Here, the pitter-pat of doggie feet wasn’t far behind.