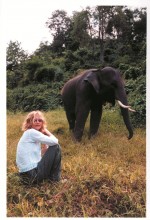 Sleepless in Chiangmai, Thailand’s elephants mesmerized Meg Ryan, America’s favorite ‘girl next door’ with their rendering of prison-yard blues. Ryan will star in a documentary set to broadcast by the end of the year, focused on the plight of the Asian elephant.  Meg visited many locations throughout Thailand, including the Center of Thai Elephant Conservation in Lampang, a town north of Bangkok, where she was treated to a concert by the so-called ‘Pachyderm Philharmonic’.  This usual band of elephants plays harmonicas, drums and gongs to an impromptu tune; haunting and sparse.

Meg also spent time in Chiangmai to learn about elephant conservation and observe the beautiful beasts in their natural habitats.

The Asian elephant, a species that in Thailand numbered about 100,000 a century ago, has dwindled to a mere 5,500, due to human encroachment onto their land and over-forestation.  For thousands of years, the elephants’ work was crucial to the Thai economy, but now jobless and displaced from their natural habitat, many spend their days trudging down the concrete highways or performing street tricks to earn beggars’ keeps.  Meg’s patronage of these musical mavens is certain to move them to the top of the charts and give their plight the attention it deserves.