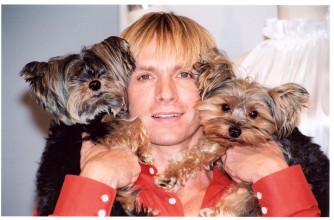 The slim blonde designer grew up in South Africa, a place where colonial remnants such as zebra skin carpets, elephant foot tables and wall trophies were not uncommon.  Bouwer, though, adamantly rejects these, knowing the evils of poachers and realizing that the use of animals in the home or as clothing is ‘unnecessary and cruel’.  His love and respect for animal-kind is apparent, as while telling his tale, Bouwer bends to pet his Yorkies, Goliath and Delilah, and offer his eager companions his cheek for their affections.

His apartment is already bustling with the dogs and a twenty-year-old Maine Coon cat named Cosmo.  Marc smiles as he admits that he has to avoid pet store windows, knowing that he can’t resist the furry faces peering out at him.  ‘One day when I have a house and a beautiful garden they can play in, I’ll have as many dogs as I can,’ he says.  In the meantime, his pups will have to settle for romping through his New York City garden of glamorous gowns.