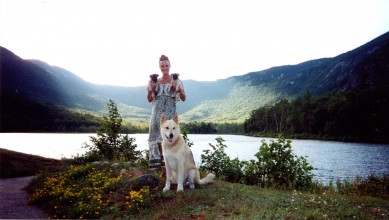 ‘I’m spreading pug love!’ exclaims Christina Perrin, fashion designer whose glamorous gowns have been favored by such celebs as Vivica A. Fox and NYPD Blue’s Kim Delancy.  Perrin is not only influential in fashion choice but also in canine choice.  Like a proud mother, she brags that after spending an evening at her home, several friends were so taken by her pugs’ charms, that they immediately adopted their own such companions.  Who made Perrin a pug fanatic? It was George, her husky-shephard-timberwolf mix, found in the woods in Perrin’s native Ohio and jet-setted to New York City, who was first smitten by the irresistibly scrunchy-faced-bug eyed pups.  Indulging George’s puppy love, Perrin calls her pugs, Delilah and Carlitos, her ‘pet’s pets’.  Like any good fashionista’s dogs, these svelte pups prefer carrots as treats, but always welcome an occasional indulgent meal whipped up by Giorgio, the canine trio’s private Daniel Bouloud, trainer and dog walker extraordinaire.  Perrin cites Dior, Saint Laurent and Schiaparelli as inspirations to her edgy and distinctive designs, but it’s her three furry muses who keep her well so that she can keep working runway magic.