Lucy Liu is best known for her witty antics as the character Ling Woo on Fox’s hit television series Ally McBeal. She has also been acclaimed for her roles on ER, NYPD Blue and LA Law. Most recently she appeared in the smash hit film Charlie’s Angels, where she starred opposite two other A-list actresses, Cameron Diaz and Drew Barrymore. As for the future, Lucy plans to reduce her appearances on Ally McBeal so that she can concentrate on her film career.  Upcoming films for her include Brit spy thriller The Company Man and a possible sequel to Charlie’s Angels. Besides acting, Lucy’s loves extend to dance, photography and Kali-Eskrima-Silat, the art and practice of knife and rod fighting. However, many are unaware that when she is not filming, chopping or both (see Charlie’s Angels), Lucy is cruising the Los Angeles area looking for abandoned or stray pups. When she discovers helpless canines, Lucy is quick to pick them up, deliver them to the vet, and then find the lucky pooch a home with one of her friends.

When Animal Fair recently caught up with Lucy, she laughed about her frequent pet stops and exclaimed:

“I’m running out of friends! I need more for all the dogs I rescue!” Lucy was on hand in New York City’s Central Park to promote new Purina Beneful Brand Dog food. 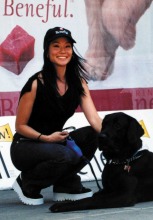 She spent the day praising the new food and hugging her friend’s adorable three and a half year old lab mix, Eb. Her own pup, Luciano, a German Shepherd mix, cheered Lucy from their home in California, as he was too big to make the long trip. Lucy stated: “People don’t realize the huge responsibility that goes along with having a dog. So many people get a dog and after it’s grown, they don’t find it cute anymore and so often they’ll get rid of it. This isn’t right, your pet is important, and it should mean something to you.”

Animal Fair agrees and salutes Lucy for being a devoted advocate of animal welfare. She proves that to save a homeless pup all you have to be is an animal lover with a big heart and a considerable amount of open-armed friends!