If you loved the 1998 blockbuster “Doctor Dolittle”, get ready for another dose of comedy and animal adventure.

Eddie Murphy returns as the doctor who can communicate with the animals, in “Dr. Dolittle 2”, the sequel to the 1998 comedy.  This time around, Dr. Dolittle is off to the great outdoors where he tries to save the home of his woodland friends from scheming land developers.  A Pacific Bear named Ava is the key to defeating the developers, since her endangered species status would win government protection for the bear and her habitat.  There’s just one problem: Ava must have a mate before the government will step in to protect her.  Enter Archie, a wisecracking circus bear that Dolittle convinces to return to the wild.  It’s definitely not love at first sight when the two bears meet, driving Dr. Dolittle to his wits end trying to make the match work. 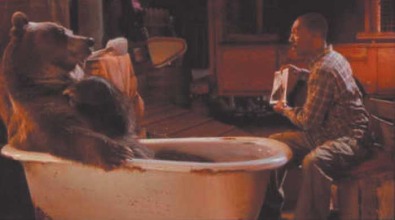 Archie is played by Tank, a bear that wowed the film’s director and producer in an open casting call for animals and trainers.  “Tank the bear and his trainer Doug Seus won out,” said producer John Davis.  “He was head over heels over the other bears.  It was like he was almost human.” Despite his anthropomorphic qualities, however, Tank was no tame animal, and the crew had to make some changes on the set in order to accommodate his behavior.  Since bears are easily distracted by smells, crew members had to refrain from using scented deodorant and cologne, eating food, or carrying mints on the set.

Because filming took place in the winter when bears are usually hibernating and not very hungry, verbal praise was a bigger incentive for Tank than food was.  Following the trainer’s lead, the crew would often encourage Tank with kind words when he completed a trick successfully.  “Tank would sit and there would be a chorus of “Good Boy, Good Boy” that would last fifteen minutes,” recalls director Steve Carr.  Tank wasn’t the only animal that the film crew had to work with – “Dr. Dolittle 2” employed over 250 different animals, including orangutans, giraffes, deer, and possums.  Filming a movie that mixed humans with predators and prey of the animal world took quite a bit of planning.  “You write a scene where a hawk is sitting next to a rabbit, that could be visually funny,” says Carr.  “But the fact is, if you put a hawk next to a rabbit, at the end of the scene you’ve got one left and it’s not the rabbit, it’s a big fat hawk.”  Carr solved this problem by using a motion control camera that allowed him to film both animals separately and create a final composite shot.  Eddie Murphy and his human co-stars were also filmed separately from some of the more dangerous animals they shared scenes with, including a bear and giraffe, although they did work face-to-face with beavers, raccoons, lynxes, and possums.