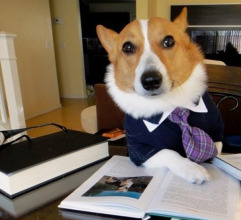 Malpractice. Custody Battles. Estate Planning. If the notion of a pet lawyer sounds like a New Yorker cartoon, it’s time to enter the 21st Century.

Marc Bluestone’s grief may eventually subside, but he wants to make sure Shane’s death was not in vain. So, he hired Robert Newman, a California pet attorney, to fight for justice. Newman believes Bluestone, whose four-year-old mixed breed died after allegedly being misdiagnosed and overmedicated by a veterinarian is entitled to a monetary reward that accounts for his client’s suffering and punishes the veterinarian for gross negligence.

In legal parlance, Newman is seeking punitive and exemplary damages for Shane’s death in a court system where pets are defined as property and damages are usually limited to their market value. Newman has reason to hope for success. Increasingly, lawyers nationwide are persuading courts to award added damages for loss of companionship or for emotional distress of the owner when a pet is injured or killed. In civil cases involving veterinary malpractice or pet deaths, some lawyers have won verdicts and settlements exceeding $20,000. And in the case of intentional and malicious killing or injury, judges are more frequently awarding punitive damages.

“There is no amount of money from a lawsuit that will bring Shane back,” says Bluestone, a Woodland Hills, CA. resident, “but if I can make the veterinarian pause to think, then I will accomplish my goal.”

Like Bluestone, legions of pet owners are hiring pet attorneys to deal with issues ranging from malpractice to custody battles to wills and estates. A shift in legal precedent is taking place because more attorneys are willing to battle for the rights of pets, not as chattel, but as family members. Most lawyers are not fighting to have the law view animals and humans equally, but to honor the special kinship they share. In recent years, attorneys have been asking judges and juries to assign far more emotional value to pets and grant them greater protections. This leaves pet owners feeling more empowered to fight airlines, breeders, groomers, dog trainers and kennels when their animal companions are hurt, lost or killed.

“People are beginning to realize that when something happens, there may be something you can do,” said Steven M. Wise, a Boston lawyer who teaches animal law at Harvard Law School and other universities. “Lawyers are learning how to maneuver within the legal system that treats animals as things.”

Last year, a New York appeals court decided a long-running custody battle between separating partners by weighing the interests of a 10-year-old cat. The court did not grant custody to the partner who purchased the cat, but rather to the one whose house the cat lived in. “ Given his limited life expectancy,” the judge ruled, “Lovey should remain where he has lived, prospered, loved and been loved for the past four years.”

Barbara Monroe, 60, of Sands Point, New York hired an estate attorney to write a trust so she can leave $35,000 apiece for the care of her two cats and her two dogs, and a little less for the rabbit. “My children just don’t love animals the way I do,” Monroe said. “I worry what will happen to them.”

Barbara Newell, an attorney with the Animal Legal Defense Fund, based in Petaluma, California, says a ruling over custody of a dog in an acrimonious divorce case broke new ground. Jennifer Kidwell and her ex-husband, Ethan Assal, who once lived together in Potomac, Maryland, had a clause in their divorce agreement granting Assal a month-long visitation each year with Sable, their 9-year-old gray keeshond. During the first two years, Kidwell believed Assal was abusing the dog, so when the third year came around, she did not hand over Sable to her ex-husband. In retaliation, Assal withheld a $50,000 payment he owed Kidwell for the divorce settlement.

Last December, Kidwell and Assal went back to court to fight over money, allegations of animal abuse and neglect, and a violated visitation agreement. Stepping in to fight for Sable’s interests was the Animal Legal Defense Fund, which filed a seven-page friend-of-the-court brief. In the end, the circuit court judge ruled that Assal must pay his ex-wife and that Kidwell must hand over the dog for visitation rights. The judge reprimanded Assal for putting the dog in his car trunk and for other acts of negligence.

“From a legal standpoint, the visitation clause would have no validity because in Maryland the dog would be viewed as a piece of property,” said Newell. “By enforcing the visitation clause, the court departed from its historical point of view and viewed the issue of Sable as a custody dispute.”

Increasingly, lawyers across the country are addressing issues of the human / pet relationship and fighting for your rights as well as your pets’. Remember, you do have legal recourse to protect the bond you share with your furry friend!

Tina Traster is a freelance writer on a range of topics, writing feature and travel stories for a number of magazines and newspapers, writing about animals frequently.  She and her Shih Tzu, Chelsea, reside on the Upper West Side of New York City.

Pet Attorneys in Your Area: