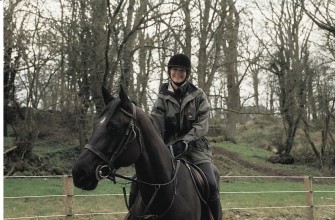 If you’re looking for the best, go to the source.

Horses have been my passion since I was eight years old.  After a tumultuous eighteen years of not riding I found my senses again four years ago.  My first riding vacation was to France with Cross Country International. It started out being the trip of a lifetime, but I realized I had only been living half a life by ignoring what made me the happiest.   So, it became the first of many adventures.

My latest trip was to Ireland where the horse is woven tightly into the landscape and the lives of the Irish people. I arrived in Shannon on a mild morning in March.  John, the driver, took me to the Dunraven Arms hotel in the beautiful little town of Adare. John, like most of the Irish I met, was full of wonderful stories of the area that were told with a very special Irish sense of humor.

Jet lagged and groggy, I fell asleep on the most comfortable bed I have ever slept on, besides my own.  There was a fire going in the fireplace, and seven down pillows surrounded me. I thought, “If I never leave this room, it will still be a fine vacation.”

The wonderful thing about the Dunraven is that everyone who works there is ready and willing to help you, serve you and make your stay as comfortable as possible. They make you feel like royalty. It doesn’t surprise me that Princess Grace chose to spend her honeymoon there. I felt like I had gone back to my own comfortable childhood home in the country for Christmas.

After a few hours of deep sleep, I donned my riding clothes and headed out to the Clonshire Equestrian Center, which is about 2 miles from the Dunraven. The driver was always ready and willing to take me to the Equestrian Center, where an Irish Hunter was waiting for me, and I was off for the ride of my life!

In the 18th century the Irish farmers began to breed tough powerful workhorses. They were then bred to the sleek, fast Thoroughbred to produce the famous Irish Hunter, a horse with the stamina and strength needed for jumping and hunting.  A horse in the United States capable of high jumps would normally be very high strung.  The fear of flying would be combined with the fear of never stopping, which can turn into a day of holding back as hard as you can. The Irish horse is much calmer and easy going, more of a partner in the most wonderful dance of cross-country jumping.

I arrived at the center, my heart pounding with anticipation. Would I   break my back trying to fly over the jumps like Elizabeth Taylor in “National Velvet”?

I knew I was in good hands because Sue Foley and her husband Dan run the program. Sue is the winner of the famed Dublin Horse show and Dan is a well-known steeplechase jockey. My heart was still pounding anyway.

A beautiful young Irish girl named Ginny, led Mavis, a large black horse, out of the barn and told me to mount up.  It was a long way up.  Once on Mavis, with Sue’s calm voice telling me how “grand” I was doing, I settled into a confidence and a trust that would bring me to heights I had only dreamed of before.

Starting out in the indoor ring Sue guided me over small jumps at first, counting to the time of the horse.  Sue would be lifted off the ground as the horse flew up and over the cross rails. I felt like she was up there with me and I’m sure she felt the same way. 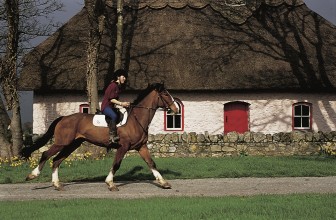 With my confidence raised, I headed out to the field, rolling green separated by gray white stonewalls and bushes, ditches, water and mud.

First we started with small jumps, but watching the more advanced riders go over the higher jumps I felt a little left behind.  “I can do that,” I thought so I started towards a jump that was higher than I had ever taken; then I thought, “Nah, I really don’t want to do that.”  I am convinced that horses can see you on their backs and read your mind, too.  Mavis decided to listen to me and stop before the jump, but I almost went over without her. Somehow I managed to stay on.

Next time, I urged her on stronger and made the commitment to fly. Fly she did. Up and over like an eagle. Everyone watching clapped and laughed and I wanted to do it again, but higher.

When I returned to the Dunraven that afternoon, the bar was filled with storytellers talking of horses, the hunt, the jumps, and the steeplechases as they sipped their pints and warmed up by the fire.  The artwork on the walls depicts horses and jockeys and a life that dates back thousands of years on this green island where the horse is the king.

After a bubble bath in a tub big enough to stretch out my legs, I strolled down to the dining room for a dinner of fresh Salmon.  The food was magnificent and the service could not have been better.  That night I fell asleep watching the horses glide over jumps in my mind, turning to face the next one and carrying me with strong backs through a color green that can only be seen in Ireland.

The Clonshire has exclusive privileges to ride on the trails and roads leading to quaint little pink thatched roof houses and dandelion fields. So the following day we went on a hack to Hollywood House, the estate owned by Peter Lynch of Boston. (Hollywood, California took its name from this magnificent piece of paradise.)

In this setting, as I rode over water jumps and Irish banks, I formed a trusting partnership with Mavis. To think that fear almost made me miss the wonderful week I spent with the horses! I will never forget the warmth of the Irish people and the willingness of the Irish horse.