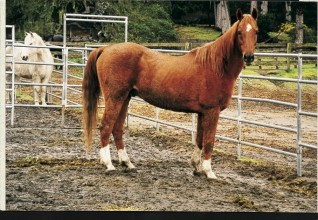 Pokey, an American Saddle-bred, used to live in the hills of San Jose, Ca. with his mother and two other American Saddlebreds.  The four horses had an enjoyable life in the field with their first guardian.  When their original guardian died, the horses were turned over to a new guardian. She believed the horses were damaging the field by eating down the grass, so she left them  on her 40-acre property without care and supervision.

Because the field was unsupervised, the horses were left with nothing other than grass, which eventually dissipated. Two horses died of starvation leaving mother and son. A few months later, Pokey’s mother, starved and emaciated, became entangled in a fence. Too weak to free herself, she remained there for days. Pokey stood over her chasing away an occasional coyote, but she eventually perished.

The Humane Society of Santa Clara Valley found Pokey standing next to his mother’s dead body, keeping company with the ghosts of his fallen horse friends. In addition to all he had endured, Pokey was covered from head to tail with ticks. His then guardian told the Humane Society, “Ah, that Pokey is nothing but a rat hole.” Fortunately, the Humane Society gained guardianship of Pokey and called Redwings to take him in.

Redwings Horse Sanctuary is a not-for-profit organization that provides education about equine care and protection from abuse and slaughter. Redwings also offers a permanent home for rescued horses.

Julie Carpenter and Karen Scwingel, two trainers from Redwings, took Pokey to Carpenter’s Miracle Mountain Ranch where Pokey was bathed and bathed until clean. Carpenter and Scwingel removed all the ticks by hand. The farrier trimmed his hooves and the vet offered a full examination. He gave Pokey shots and worming paste and informed the concerned trainers that Pokey was almost totally blind.

Carpenter and Scwingel brought Pokey to a special pipe rail paddock and stall area right next to Redwings’ main herd of horses.  The other horses went over to greet him. They took turns nuzzling him and rubbing his neck, a form of horse hugging.

The challenge was to offer Pokey a new life despite his blindness. Life enrichment is an important aspect of Redwings, rescue is not enough. Redwings wants to ensure that the horse has an enjoyable life with his new companions, playing, grazing, sleeping in the sun and rolling in the grass. Because Pokey was nearly blind he needed to find a new friend to lead him. Redwings will be experimenting with new technologies, already available for sight impaired humans, in the future that will allow Pokey to know when he is approaching a fence or other stationary object by using special sensor devices. For the time being, he needed equine assistance.”

Luckily Pokey found a friend in Sedona, a beautiful Peruvian Paso mare. Sedona is only ten years old, but she’s already partially lame. Although she’s mobile, her front legs are not able to provide proper support and she can no longer run without the risk of falling down. But neither Pokey nor Sedona minded each other’s conditions as they found a trusted companion in each other to live with and follow around the pasture.