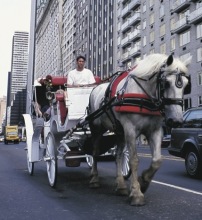 We’ve seen it thousands of times on screen – two lovers huddled together in the back of a carriage riding through the streets of New York in springtime. The driver is cheerful and witty, as the couple gaze into each others eyes taking in the beautiful scenery.  We are entranced, and dream of such romance for ourselves the next time we visit New York City.

But what about the horse?  Yes, remember the horse—-the creature that is doing all the grueling work, braving the urban streets with blinders on as it pulls our couple farther into a scene of romantic bliss?  Why is it so easy to forget about the horse?  Let’s face it, most of us are unwilling to drive our cars through New York City.  Yet we find it acceptable to hire a living creature—a gentle, amiable animal—-to pull us through the congested city traffic during all sorts of weather conditions; confronting the dangers of the far-more-powerful and speedy “horseless carriages” that dominate the streets; inhaling the fumes of trucks, cars and buses; and facing road rage. Depending upon the local regulations, horses labor nine or more hours a day with only brief required rest and water periods.

Two of the earliest groups founded for the protection of animals, the ASPCA and MSPCA, now generally bring to mind the care and support of dogs and cats.   Yet it was actually the plight of horses that inspired the founders of these two groups to speak out courageously against a society where animal welfare was not greatly valued.  The sight of a work horse driver beating his fallen animal compelled New Yorker, Henry Bergh, to found the ASPCA in 1866, and to crusade for laws protecting horses from abuse and overwork.  In 1868, a Massachusetts newspaper article reporting that two horses had been ridden to death in a race over 40 miles of rough road elicited a furious protest from George Thorndyke Angell, resulting in the founding of the MSPCA and passage of the Commonwealth’s first anticruelty statutes.

Yet 140 years later, when the abuse of smaller companion animals dominates our cruelty concerns, some 140 carriage horses still work the streets of New York City, never enjoying the freedom of open pastures or the chance to socialize with equine companions.  When not working, most carriage horses are kept in four-foot wide stalls, lacking room to turn around or lie down.  The carriage horse is a commodity item, purchased for $600 to $1200 at the start of their careers; when they are no longer useful, they are sold by the pound to slaughter house buyers for about the same price.  As a result, there is little motivation to obtain veterinary care for lame or sick horses. 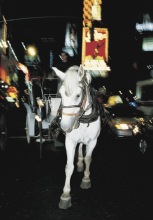 Carriage horses are not, of course, completely unprotected by law. In New York City, for example, they may not be driven at a pace faster than a trot and a lame horse must be immediately taken out of service and be seen by a veterinarian. The driver may not operate a carriage when the temperature exceeds 90ºF or is below 18ºF  (under New York statute, however, no adjustment is made for wind chill factor or the humidity index).  During the winter, while at rest, horses must be covered with a blanket.  The deaths of three carriage horses in the searing heat of the summer of 1988 caused the New York City Council to greatly restrict where and for how long the horses could work.   But by 1994, memories had faded and the Council lengthened the horses’ work day to the present nine hour day, seven days a week and enlarged the area in which the carriages could travel to include more of Manhattan’s traffic grid-locked midtown at night.  The enforcement of these regulations falls upon the NYC Departments of Transportation, Health, Parks & Recreation, and Police, along with the ASCPA.  If you witness a carriage horse being abused in NYC, note the carriage license plate, the time and location of the occurrence, and a description of the horse, including the hoof number branded on the left front hoof.  Report this information to the ASPCA at (212) 876-7700, ext. 4450. In other cities, alert the local Humane Society or Police Department.

Perhaps by now, the carriage ride has lost some of its appeal to you. But if you still feel that taking a carriage ride is essential to experiencing the excitement of New York City or any other city, consider making the ride as humane for the horse as possible.  If there is an available open area, like New York’s Central Park, restrict your ride to that green space.  You will experience nature in the midst of the city and your horse will spend the least amount of time in traffic.  During a hot or humid summer day, wait until dusk or the evening to take your ride.  The weather will be more pleasant for you and your horse will be subjected to less stress.

Above all, even in the midst of an idyllic carriage ride, we need to remember the horse, its natural place in the world and its social and physical needs.  We should reconsider whether the mechanized, crowded, urban environment is really where the horse belongs.