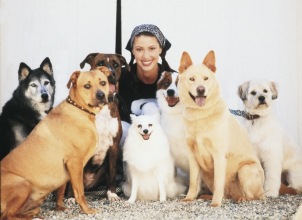 If you’re old enough to remember Rebecca DeMornay’s star turn opposite Tom Cruise in “Risky Business” more than a decade ago, chances are you’re going to like Shannon Elizabeth, even if you’ve never seen “American Pie.” Of course, if you’re young,  you’ve seen “American Pie”, and we don’t have to tell you that she lit up the screen like a firecracker in one of the film’s most memorable scenes. Suffice to say that the twenty-something Elizabeth’s career-sparking performance in the giant-grossing teen comedy is the newest in what has become a grand old Hollywood tradition; rising young actress takes narrowly-drawn role in small teen film, and through her own creativity — and charm — turns it into a career launching pad.  What makes this especially wonderful is that Pie was Shannon’s first studio film.

That, in a nutshell, plus an on screen strip tease, some especially creative use of the Internet, and an impressive imitation of a Czech accent, has brought the Texas-raised Shannon Elizabeth to the brink of a rather sudden stardom, and her first co-starring role in this summer’s horror spoof, “Scary Movie”. Playing Buffy Gellar, a rich girl pursued by a bumbling serial killer, Shannon gets to try out her comedic chops with actor Shawn Wayans and actresses Cheri Oteri and Carmen Electra.  “Its an ensemble cast and we just wanted to have fun,” says Shannon, who says the film’s gross-out humor is bound to be a hit among teenagers.Yet talking with Shannon, one very quickly gets the impression that her newfound fame, hot career and big paychecks don’t mean as much to her as her “babies” — her fiance, actor and writer Joe Reitman, and a brood of seven dogs that keep the Los Angeles home she and Reitman share in a perpetual state of furry fun. The dogs range from terrier mixes to chows to boxers and ridgebacks. “Fortunately for me Joe loves dogs,” says Shannon. “He’ll get on the floor and roll around with them. They think he’s another dog.” That the couple would share this love comes as no surprise. “We met in an acting class,” remembers Shannon, “and I felt a weird energy go through me when I shook his hand.” But as much as Joe loves the pets, says Shannon, “I’m not sure he expected seven!” When Joe needs a little peace and quiet from Shannon’s animal kingdom, he can always go to the movie set. This summer his career will be taking off in a big way, too: he’ll appear in the blockbuster ‘Perfect Storm’ with George Clooney. 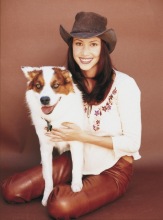 Although she’s only been in Los Angeles a few years, Shannon herself is one of a breed of pet lovers that is becoming increasingly common: the rescuer. Eschewing breeders, and expensive kennels, pure breds and blue ribbon dog shows, rescuers often do work cities and counties can’t or won’t do — taking needy animals off the streets and nursing them back to health — merely for the reward of loving an animal and being loved back. She assembled her collection of animals off the streets, from the pounds, anywhere a castaway or lost pooch might be found. “I can’t help it,” says Shannon. “Anytime I see a stray I say ‘come to me.’ I can’t stand to think he might not have a home.” Maybe her feelings go back to her childhood in Texas, when her family dog ran off after a housekeeper left her in the garage unattended. “I was devastated,” Shannon recalls. A kind uncle replaced the pooch with a parakeet, but the bird suddenly died. “I don’t take pet deaths very well,” Shannon says.

So, arriving in L.A. to launch a career as a model, Shannon first took on a boxer-pit bull mix that a photographer friend could not move with him to England. Sasha proved to be so loveable that she began adopting more. Amber, a ridgeback, was found by a friend in Long Beach, wandering the streets covered in mud and tar. Amber and Sasha hit it off, so Shannon decided to keep her. Boomer, a terrier mix, was also found by a friend. “I brought him home in my arms like a baby. Joe saw him and said ‘he’s cute, but another dog?’ Carmen, a beige-chow mix was rescued from a pound. And soon came Skylar, Jasper and Six, a husky mix.  “Rescue dogs are the best. They are so thankful that you’ve saved them,” Shannon says. “You can see it in their eyes. It’s funny because its the same thing in Hollywood. People who come out here and are given too much too fast, given everything on a silver platter, don’t appreciate anything. A little rejection makes you appreciate everything more.” 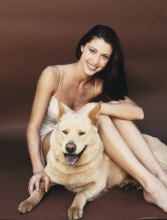 Occasionally she’ll take all seven dogs up to the open space high on Mulholland Drive and let them run to their hearts are content. Piling them in her Honda is surely a sight. Shannon trains most of the dogs herself, but for a couple of the more difficult ones she hired a professional trainer. Back at home the dogs go through about forty pounds of dog chow per week — a special healthy recipe that Shannon orders by mail. And of course, they have their familiar routines. When one starts barking, the rest will soon follow, but they all know Shannon’s footsteps. “They get quiet when they hear me coming,” she says. Sleeping on the bed was once permitted but only on rare occasions now, she says. “You should see the hair,” she laughs. “I have dog beds for them but they like my bed better. Sometimes when I go out of town and come back, I see hair on the bed. Where do you think they were sleeping while I was gone?”

Although Shannon avoids the Hollywood party scene, one of the benefits of her celebrity is that it draws web surfers to her website, Shannon Elizabeth.com, which she uses to promote animal rescue organizations such as SPCA L.A. and the Amanda Foundation, which place needy animals in good homes. So far, ShannonElizabeth.com has registered an amazing 8 million hits, based in no small part on her role in “American Pie”. In fact, if you go to the site, you can see Shannon and some of her pets. She’s doing what she can with her piece of the pie, and sharing it in the best way she knows how. And a lot of little doggies out there are thankful for that.